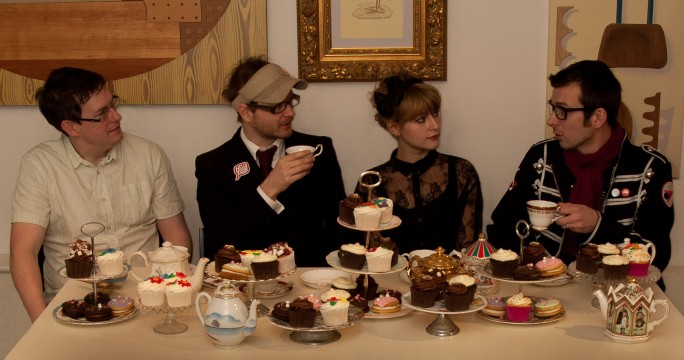 We first stumbled across Yunioshi at the Airwaves Festival in Reykjavik, at a gig outside a skate-shop. Or to be precise, in the skate-shop’s halfpipe, decorated with a bicycle in a tree (complete with exploratory small child), waiting for some hardcore Icelandic punk. Icelandic punk Yunioshi are not however – hailing from Nottinghamshire and monikered courtesy of Truman Capote‘s obsessive Breakfast At Tiffany’s character, not to mention Yunioshi’s own obsession with all things Japanese – Yunioshi embrace the genre of spacehopnoiseguitarelectrofunk with (obsessive) abandon and verve.

With nods to Beck and whatever Kraftwerk would have turned out like if they’d had a girl in the band, Yunioshi have won over BBC Introducing with their themes of (you guessed it) obsession and (less obviously) free homemade cake. They’re regulars at festivals in Canada and Iceland and unsurprisingly, have a respectable quantity of fans in Japan. You may also recognize their 60s spy film-influenced number Thunderbird from last season’s South Park trailers, and if you’re easily swayed by adverts then they may also have been instrumental in your last car purchase or satellite sport-viewing decision.

But Yunioshi aren’t about selling you things. A struggling band’s gotta buy cake ingredients to entice you to their gigs somehow, right? Not that you’ll need enticing, oh discerning reader. Yunioshi’s feisty funked-up beats are saucily styled to make your pelvis pivot and your grin groove. Singer Rob Yunioshi has a crack team of beat rancheros – Anna with keys and melodica, James provides bass services, and probably the most dedicated drummer about – not only does his adopted name Hakushi mean ‘beat’ in Japanese, this is a man who spits in the face of spinal tumours, ignores the minor inconvenience of drumming from a wheelchair, and uses three sticks at once to reinvent the intense percussive expression that drives Yunioshi onward in their mission to bring you tunes that will make you happy in your pants.

So, time for your free Yunioshi download, a cheeky re-working of Shakira’s She-Wolf. Don’t expect Columbian belly-dancing, but do expect your shoulders to wiggle. If that whets your appetite sufficiently then head to Gogoyoko to stream Yunioshi’s EP How to Survive A Robot Uprising for free, and indeed buy it if you so desire. You really should do. It’ll keep them in cake-making ingredients and those extra drum sticks.