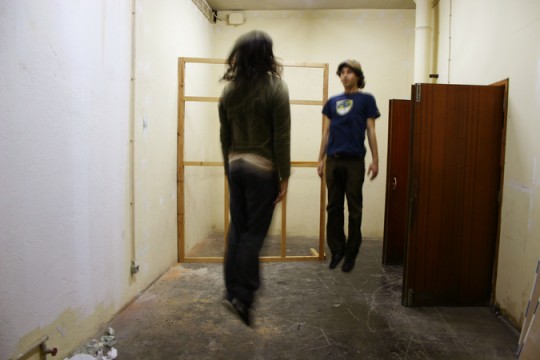 Youthless are New York City-born Alex Klimovitsky (as seen rolling down a dune in Q3) and London-born Sab Ferranti. Alex plays drums and sings (and sometimes even plays synthesiser with his free hand) and Sab sings and plays bass through two amps, alternating with his dozen-or-so pedals. With the aid of some FX boxes and other toys their abrasive energy falls on the sonic scattergraph somewhere betwixt T. Rex, Male Bonding and DFA 1979.

Youthless are usually based in Lisbon. Right now however they’re probably holed up in London, bathing leisurely in the sea of praise that has followed their recent, storming appearance at In The City (Manchester’s annual industry showcase). Here their mix of twitchy garage-rock and snappy, dance-infused mayhem proved one of the biggest breakthroughs of the get-together, and landed the duo the much-vaunted mantle of buzzband.

In Portugal Youthless have supported the likes of The Horrors and Crystal Castles and even found time to soar to the heights of the Portuguese MTV charts. Their songs shine with innovation, joyful realisation and colour and it seems their snaps do the same. In fact I’d go as far as to say that these boys look and sound like our kind of trouble. If the pert hammers and nonchalantly burnt-out car don’t do it for you then go and stand in the corner and listen to this (the curiously-titled Casper Butterflip) and have a little think about what you’ve just done. I think you’ll come round to our way of thinking. C’mon youth!