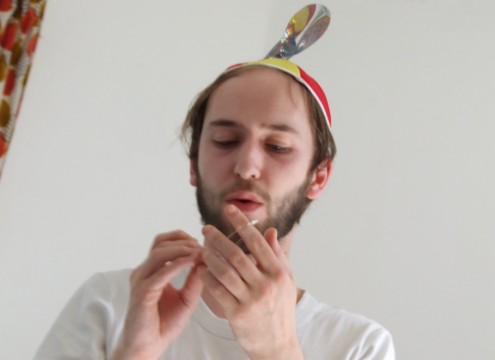 Vincent Nifigance is the recording name of an anonymous independent musician based in Manchester. He records somewhat abstract and whimsical songs with an occasionally scatological – but undeniably melodic – bent, on low-grade instruments and recording equipment.

His earliest output surfaced in 2006, followed by his debut release (The Shambolic Fuzz-Pop ExtraOrdinary) which was released via New York’s Olive Juice Music in 2007 and described in various quarters as “fuzzed-out, minimalist home-fi”. He was then linked with New York’s anti-folk movement (perhaps owing solely to his association with Olive Juice Music), although he himself seems loathe to pledge allegiance to any particular scene. During 2008 Vincent was rumoured to be working on an ironic concept album (The So-F*%king Sophoclean Sophomoronic Pretension), but instead his follow-up LP finally appeared in 2009, with its delay explained by a new title – The Self Fulfilling Secondary Stumbling Prophecy.

As well as these snaps Vincent has taken for us, and this download we’re dishing out – curiously titled Hug, Hug (Bleuch).