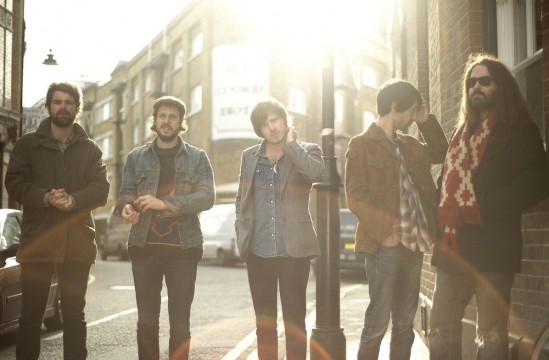 Treetop Flyers are a London five-piece who specialise in rootsy, folk-tinged rock that harks back to the golden age of the Laurel Canyon music scene. Formed in 2009 and based in West London, all five members of Treetop Flyers have been in bands before – Reid Morrison fronted the country-skiffle group Morrison Steam Fayre, American ex-pat Tomer Danan was part of New York City’s Robbers On High Street (who regularly toured with The National and Interpol), guitarist Sam Beer (who is also a gifted artist and painter) was a well-known solo act on the London circuit, bassist Matthew Starritt used to play in tropical punk outfit Rum Shebeen and guitarist Laurie Sherman, once a semi-professional skateboarder, was involved with respected country combo The Barker Band.

Their music is that familiar blend of country and soul which seems to be all the rage amongst the hoi-polloi at the minute but, as Morrison says – “our songs have a harder edge and embrace a more contemporary sound. Our influences range from Van Morrison and Neil Young to Ronnie Lane and The Coral. We have this cauldron and we put all those influences and others in”. Admired by the likes of Adele, who’s a fan of Reid’s voice, Laura Marling and Guillemots, the band have become regular fixtures at Communion and Blue Flowers club nights and their compelling live performances have earned them a devoted and burgeoning fan-base, which lead to appearances at this year’s Glastonbury and Hop Farm festivals, where they playing to packed-out tents.

Treetop Flyers are currently working on their debut album, which is set for release early next year. They will release their new single It’s About Time through Communion Records on 18 September. Self-produced at Courtyard Studios, Oxfordshire, the single was recorded by Ian Davenport (Supergrass, Band Of Skulls). You can listen to it below or, if you want to hit play whilst you browse their snaps, then here is probably better.