Interview With The Wind-Up Birds

A CATACLYSMIC CLUTTER OF CLARITY, CONTRADICTION, CONTRAVENTION AND CAUSTICITY 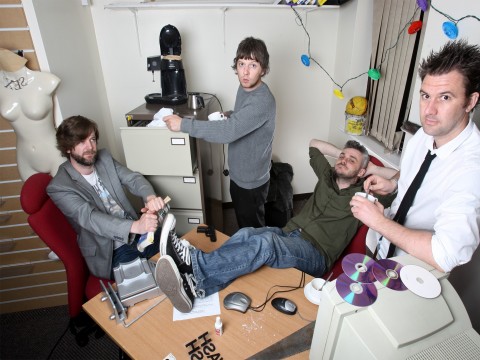 Interview With The Wind-Up Birds

A CATACLYSMIC CLUTTER OF CLARITY, CONTRADICTION, CONTRAVENTION AND CAUSTICITY

My life was cataclysmically ruined by The Wind-Up Birds the day I reviewed their eponymous EP some six years ago. Symbolically, it was the same day my cat ran away (read into that what you will). To me they are a clutter of clarity, contradiction, causticity and contravention. They excel in giving me bad dreams which I only ever half remember. They revel in sabotaging their own hard work. They are (if you’ll believe their propaganda) either long-term sick or acting thick for money. Their songs are both a defence mechanism and a rallying cry. Others don’t always share my lusty admiration for this band. I have had notable arguments with people who just don’t get The Wind-Up Birds. Like my absent cat, these people are no longer in my life. Read into that what you should.

The Wind-Up Birds are an angular, artistic trade union hell-bent on transforming accepted realism into surreal revelation. They camouflage progressive rock with snarling, sneering punk, though they are more punk than punk itself, because they care not for fashion or fad. Their songs are a jeremiad against the superficiality of contemporary politics and broken Britain. They are the unseen scene. They have crawled from the slagheap to ply their honest trade, picket the lines and throw rocks at the scabs. They represent the collective soul of pickers, packers, gaffers, strikers, playgrounds and warehouse floors. If they ever make a film about The Wind-Up Birds then Paddy Considine will play every character, Ken Loach will direct, and it’ll be shot entirely in Burmantofts. There will be no discernable plot other than grit. You see The Wind-Up Birds are realer than reality itself. Fame is not an option. They don’t need your attention – nor do they crave it – but you’d be advised to pay attention. Through their vision you shall become both a voyeur, a victor and a vagabond.

The Wind-Up Birds are not shameless self-publicists (I’ve been chasing them for two years to do this feature). These four individuals will never willingly surrender. They coat themselves in confidence. They will probably break your heart in the end. Maybe one day we’ll find the words to forgive The Wind-Up Birds. But not yet. The Wind-Up Birds saved me from this slovenly world. Now it’s your turn. Start here with a free download of Past Houses, and keep an eye out for their new double A-side single (Popman/Meet Me At The Depot) which is out at the end of the month.