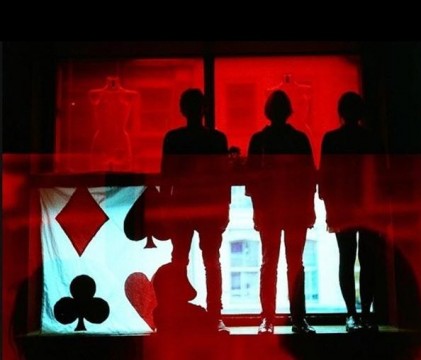 The Victorian English Gentlemens Club are a big bag of noisy, existentialist, Dada-esque punk mercenaries, who have been sent from afar (well, Cardiff) to re-ignite the dischordant DIY art school blaze that was first ignited by the likes of Ikara Colt and The Violets. With their angular riffs and unashamedly lo-fi leanings the band’s style has progressively evolved from minimalist post-punk to the far darker no-wave feel which they now piss proudly from every pore.

The band formed in 2004 in Cardiff and within two years had released their eponymous debut album through Fantastic Plastic Records (which is also home to Negative Narrative favourites Race Horses). Throughout 2007 and 2008 The Victorian English Gentlemens Club toured vigorously and worked fastidiously on their new record (Love On An Oil Rig). In typical unorthodox fashion their tour for this second album included shows in a forest, in a kitchen and on a mountain, as well as at the National Museum Of Wales. The band are now currently holed up in the studio working on their third album, due for release in early 2011.

Unsurprisingly for a talented art-school band with a heavy DIY ethic across many disciplines, The Victorian English Gentlemens Club not only push musical boundaries on their own terms but they have a good understanding of aesthetic value, as seen by these snaps they took for us too. The free download we’re hosting here – A Biting Wind Followed By An Occasional Drift Of Snow (Was No Way To Cure A Hangover) – is a great example of the bands penchant for applaudably long song titles. So tuck in (you’ll notice the first few images revolve around food), crank it up and revel in the inspiring dystopia of their off-kilter intelli-punk.

N.B. For the grammatical pedants amongst you, I feel it necessary to point out that the name of the band is correctly spelt without an apostrophe.