Interview With The Loose Cannons 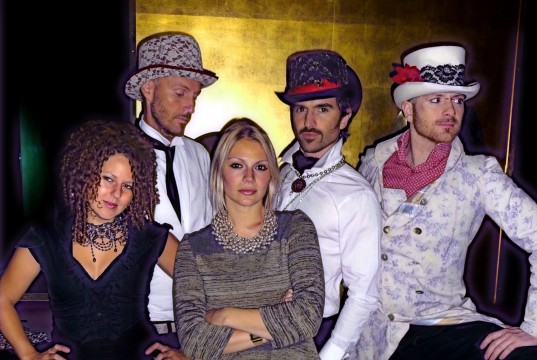 Interview With The Loose Cannons

From the casino rooftops of Vegas to the thronging crowds of the Australian festival circuit, The Loose Cannons have come a long, long way from their humble beginnings in a bedsit in South London to being amongst the UK’s most critically-acclaimed artists, DJs, producers and broadcasters.

DJ Duo-dom, Kaiser Saucy and Lord Fader have rocked parties all across the world – from the Australian Music Awards in Sydney to Armani’s yacht in Monte Carlo; from CMJ in New York to narrowly avoiding arrest in Dubai; from performing the world’s highest stage-dive (in the Alps) to an uber-art exhibition in Singapore; from Manumission in Ibiza to Keith Prodigy’s wedding. It is these credentials that have cemented them as Rob Da Bank’s Bestival after-party DJs of choice and saw them complete remixes last year for Lady Gaga, Beyonce, Timbaland, Katie Perry, Alicia Keys and The Sugababes, as well as working on their own new studio album and live show.

In the UK, their show on dance music radio station Kiss won a specialist award at the prestigious Sony Radio Awards in its first year on air and has subsequently tripled its audience. They are now tastemakers to the industry and who the public look to for the newest sounds in house music. The boys can proudly claim to be the first to discover and champion many new artists including Herve, Kissy Sell Out, Sinden, Boy-8 Bit, Does it Offend You Yeah.

Anyway, that’s enough name-dropping. Check out The Loose Cannons at Secret Garden Party where they’ll be playing live on the Main Stage at 18:00hrs on Saturday 23 July and DJing on the Wormfood Stage at 02:00 on Sunday 24 July.  As a prelude have a gander at these photos they’ve taken for us here and whilst you’re at it you really should download this live version of The Next (it’s freer than a bird). The original version of this track can be found on their most recent EP – The Ballad Of Lego Johnson (available to buy here).