Interview With The Grubby Mitts 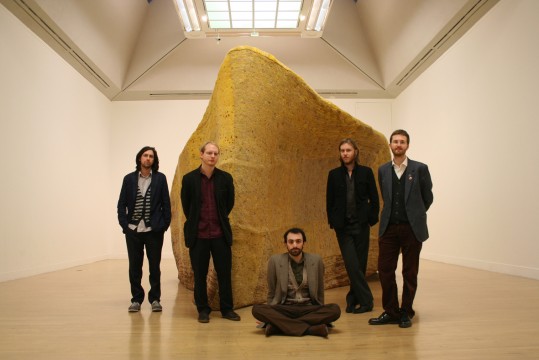 Interview With The Grubby Mitts

The Grubby Mitts are a five-piece band from Bedfordshire. They are fronted by visual artist Andy Holden whose recent solo exhibition at the TATE Britain was praised by The Guardian as “inward-looking and subtly monumental”. The Grubby Mitts have slowly established a reputation for themselves in the UK by offering elaborate multi-media concerts often in unusual locations, such as the Odeon Cinema in Covent Garden or the room of sublime landscape paintings at the TATE.  The band describe their music as, “assembled from scraps and fragments of melody, as if remembered from the night before or heard floating down from a window and taken up as a hum by someone passing by on the street below”.

Their debut single To a Friends House takes it’s refrain from a cross-stitching that used to hang by the front door of Holden’s grandmother’s house and matures gradually around looping percussion, a harmonium, knocks, pots, pans and guitars, whilst a string section and brass build towards an epic conclusion. The accompanying flipside is a clarinet rendition of the Beach Boy’s classic God Only Knows. Stripped to the bare bones and devoid of lyrics the song is given a lonely, reflective quality, providing a counter balance to the density of t’other side.

Early releases from The Grubby Mitts have included hand-painted 12” vinyl records, a white-label record, several tapes and an EP (most of which are now sold out). To A Friend’s House will be the first record to be given widespread distribution through Cargo. It’s out now on Andy’s own Lost Toys Records. You can also download Her Laughter/For Tomorrow here and of course treat yourself to a peep at these great photos.