Interview With The Grates

GRABS YOU BY THE BOOMERANGS AND SLAPS YOU IN THE BILLABONG 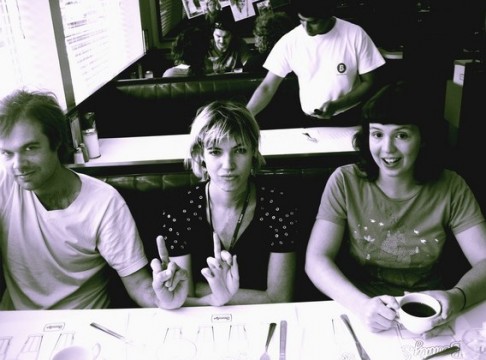 Interview With The Grates

GRABS YOU BY THE BOOMERANGS AND SLAPS YOU IN THE BILLABONG

The Grates are great. If you take into account my voracious capacity for understatement then this vivacious three-piece from Brisbane are probably even better. They make spunky punk-pop which grabs you by the boomerangs, slaps you in the billabong, toots cheekily on your didgeridoo, then rides off in your truck to the next beach party. There’s really no need to complicate things more than that other than to suggest that they sound a bit like the chaotic bits of Yeah Yeah Yeahs baked into a huge audio flapjack with the tuneful bits of Be Your Own Pet, and that (for reasons unclear to me) they somehow remind me of Scooby-Doo and his Mystery Machine-dwelling cronies.

All three members of The Grates have a background in art and they usually design their own album artwork, posters, t-shirts and even socks. Their debut album – Gravity Won’t Get You High – was released in 2006 to great acclaim and lead single 19-20-20 has been a staple of my DJ sets ever since. Having supported such bands as Arctic Monkeys, Sleater-Kinney and The Go! Team during their ascension, their live reputation is immense and, as if to prove this, a live DVD (‘Til Death Do Us Party) was released in 2007, followed by another album (Teeth Lost, Hearts Won) later that year. Following a few years of contemplation, gigging and writing The Grates have started recording their third studio album which is scheduled to surface before the end of the year.

Currently residing in Brooklyn, where they’re finishing the aforementioned album, we set the band a small photo challenge, which they duly completed. The track they’ve asked us to pass onto you is 2008 single Aw Yeah. It’s a frenetic slice of heretical sassiness, which nods to Karen O, yet retains The Grates fun-time, sunshine sound. You can (and should) grab it here because as a cartoon tiger will have you believe – they’re G-r-r-r-r-r-r-r-r-r-r-a-t-e. Greater than any Barrier Reef or White Shark anyhow.