Interview With The Flaming Lips

PROGRESSIVE FREE-THINKERS WITH A PENCHANT FOR THE ABSURD 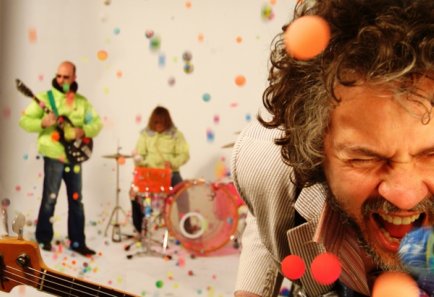 Interview With The Flaming Lips

PROGRESSIVE FREE-THINKERS WITH A PENCHANT FOR THE ABSURD

Whether The Flaming Lips are named after a venereal disease or not has always puzzled me. Most other things about this perennial cult band however are much clearer in my mind. Or at least as clear as an oily puddle is to a blind man on a foggy, fuggy morning.

The Flaming Lips formed in Oklahoma in 1983 and, unless you’ve been fast asleep in a vacuum for the past twenty-seven years, you will be no doubt be familiar with their innovative and progressive artistic inventiveness and fully aware of their lush, multi-layered, psychedelic rock arrangements and bizarre song and album titles (such as Yeah, I Know It’s a Drag . . . But Wastin’ Pigs Is Still Radical). You’ll also no doubt be aware that their elaborate live shows usually feature the same props as a Negative Narrative staff party: animal costumes, weather balloons, macabre puppets, video projections, complex lighting configurations, giant hands, fake blood, lasers, confetti cannons, and frontman Wayne Coyne’s signature man-sized plastic bubble, in which he traverses the audience. What you may not know is that in 1997 they released Zaireeka, a four CD album which can only be properly experienced by playing all four discs in separate players simultaneously. It’s this sort of endeavour which defines the essence of The Flaming Lips, and their very raison d’être.

Through a random series of events I ended up with Wayne Coyne’s phone number. We have met before – I was dressed as a goose onstage with the Lips in Sheffield in 2003 – though unfortunately he didn’t remember me. Familiar with his love of imagery (check his Twitter) and aware of his penchant for trying different things I asked him if he’d do an intraview for us. Unexpectedly he agreed and here it is – resplendent in psychedelia and drenched in saturation. I certainly hadn’t been expecting a topless photo of his lady though, or the self-mutilation for the sake of art (he’s been painting tour posters in his own blood). Lips obsessives may also notice that the song we’re giving away is a rare track that has never before been officially released. It’s called Anything You Say Now, I Believe You and was recorded during the 5.1 mixing sessions for Christmas On Mars (a film the Lips wrote, directed and starred in) for a documentary called Know Your Mushrooms. So turn on, tune in, and freak the fuck out pilgrims. It’s what The Flaming Lips would want you to do and a noble sentiment which we whole-heartedly echo.