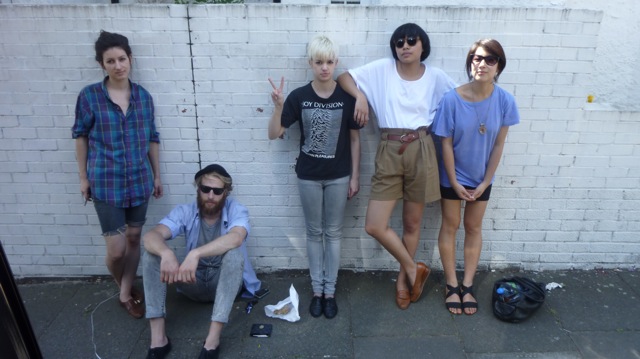 Sydney’s shimmering shadow-pop quintet Teenagersintokyo (who have now decamped to London) are a lovely bunch of creative types. Not only did they turn around our intraview quicker than a politician chucking a u-turn on a reneged policy promise, but they also bowled us over with their ethereal pop music which is laced (like a momentarily abandoned WKD in Doncaster) with aggressive beats, floaty synths and lighter-than-a-proton melodies. Think Gang Of Four, but fresher. Think The Cure, sans their maudlin misery. Think dry ice, piped directly into your soul until it spills frivolously from your ears engulfing those around you in a foggy, snug, smoggy, fug. Think of the concept of confusion, explained badly in a foreign mumble. You’re getting close.

As well as having a discerning eye for all things visual and a penchant for being downright danceable Teenagersintokyo raise hell, dress well and sure ain’t afraid to tell you all about it. Selling out shows across the land, the band are rapidly increasing their pull as word spreads about their dark energy and live intensity. Produced by David Kosten (Bat for Lashes) Teenagersintokyo‘s debut LP (Sacrifice) is also emerging as one of the most exciting indie releases of 2010. Their fresh brand of melancholic temper and feisty rhythms and hooks has seen the LP clinch the top spot on the Independent Record Store charts, as it is feverishly received by those that know. Which now, dear reader, includes you.

I’m sure you’ll agree that these snaps they took for us are like a little eyegasm, and if that isn’t enough to make your toes curl, why not slap this rather excellent free download – End It Tonight (Worship Remix) – into your awe-struck grill. Sydney. Tokyo. London. Whatever. When you sound and look this hot, longitude and latitude are about as relevant as The Vines.