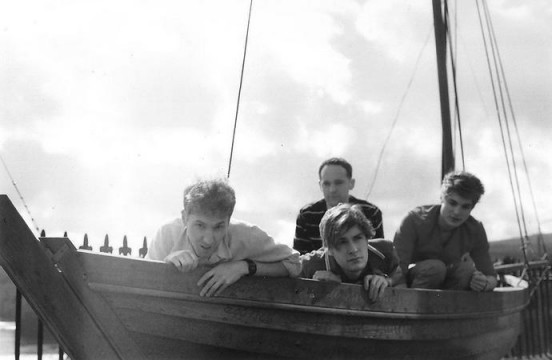 If you haven’t heard of Stornoway by now then you must live under a rock in the Outer Hebrides. However, for the benefit of any pancake-flat, Scottish pseudo-troglodytes who may be reading this (and to satisfy EU equal accessibility directives) please allow me to explain.

Formed at Oxford University over a mutual love of Teenage Fanclub, the first gig they played resulted in them winning a bowl of fruit as second prize in a college talent competition. Galvanised by this nutritious plaudit a handful of demos were recorded, a bassist was recruited, a competent sticksmith was found and feverish rehearsals were held wherever and whenever possible. Stornoway plugged away around Oxford’s tiny venues and soon caught the eye of a BBC DJ who was so besotted with them that he devoted an entire show to the band. It was pretty soon after this that Stornoway were propelled, via the medium of universally positive hype, into the big time. Subsequently, in the last year they have smashed it at Glastonbury, been named in the BBC’s Sound of 2010 poll, played a sold-out UK tour and appeared on ‘Later . . . With Jools Holland’ (see their performance here). If it wasn’t for a certain Mr Mumford and his offspring they’d also probably be coining it on TV advert royalties right now. Ok. Are you up to scratch now?

Their debut LP (Beachcomber’s Windowsill) is a uniformly beautiful selection of songs, which are both euphoric (as only sea-shanties can be), disconcerting (sometimes the softest noises make the biggest impact) and majestically magical (in an acoustically pastoral manner). There’s no pretence, ego, attitude or cynicism. If you’ve ever been obsessed with Mermaid Avenue, if the Guillemots float your boat, or if you wouldn’t mind a roll in the hay with Beth Jeans Houghton, then you’ll be double-down with this gentle folkadelia. Your Mum would surely love them too, but that doesn’t mean you can’t.

The innocent beauty and child-like wonderment that forms the soul of Stornoway’s songs is clearly evident in these exclusive snaps they’ve taken for us here in response to our questions. If that wasn’t enough check out this majestic download of Zorbing, which sounds like a scurvy-riddled, shanty-obsessed Fleet Foxes. Lush.