THE PERSPIRING BROW OF PROGRESSIVE PUNK 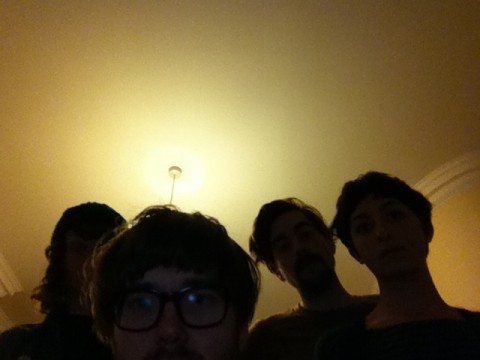 THE PERSPIRING BROW OF PROGRESSIVE PUNK

Sauna Youth are a progressive punk quartet from London who make an irregular, arty racket and enjoy telling stories. The band, attracted to the possibilities apparent within a DIY philosophy have been self-recording and self-releasing their own music for several years, creating a number of seven inches, splits and cassettes. What sets them apart from the rest of the balls-out punk crowd is their propensity for blurring the boundaries between punk and literature, occasionally recruiting visual artists and short story writers to help tell their tales. This manifests itself in moments of genius such as tracks like Town Called Distraction (hear it here) – a sprawling ten-minute poetic opus recalling a trip to the supermarket that may or may not have ever happened.

Sauna Youth’s debut album (Dreamlands) – a joint release between Gringo Records and Faux Discx – is out now, and marks the mutation of their sound and a new line-up. It’s aggressive, cohesive, energetic and intelligent and was going to come with a reading list before the band thought better of it. You can download PSI Girls for nowt here to see what I mean. It’s an eloquent reflection on the lost ability to communicate, a problem you presume Sauna Youth will never face.

Until the band make some no doubt incredible videos for their new tunes, you’ll have to make do with this insane short for Weird Friction.