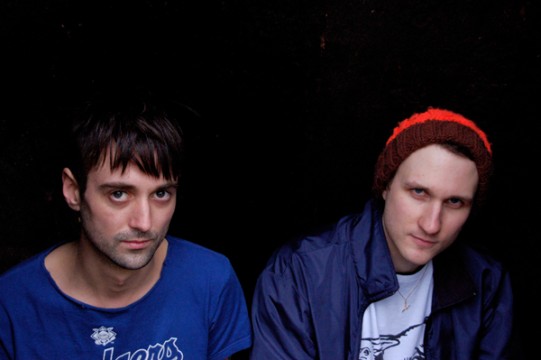 As the lines between underground electronica and savvy, accessible pop continue to blur, London duo Plant Plants are set to strike while the iron’s hot and show the world the leftfield pop that they’ve been honing since their inception in 2010.

Plant Plants are friends, Stuart Francis and Howard Whatley. Spawned from a mutual love of film scores, weird guitar tunings and heavy beats, theirs is a sound which effortlessly combines a rare blend of electronica and eclectic imagery and sets them apart from contemporary comparisons. Citing influences as varied as The Wicker Man soundtrack, Wu Tang Clan and Los Angeles based beat-scene producer Baths, it’s no surprise their oddball-electronica-meets-melodic-music, is causing waves across the blogosphere. Plant Plants self-titled debut EP (out today, buyable here), demonstrates this perfectly. Produced by Jas Shaw, one half of DJ and production unit Simian Mobile Disco, it’s a modern re-imagining of a sound reminiscent of early 1990s bands first discovering electronic music, and mines the fertile seam of the first wave of post-rock. The EP fuses math rock guitars with aquacrunk synth programming and hip-hop wizardry, and occasionally sounds like Suede or Sparklehorse would, had they trod the electronic path. Trying to hang easy reference points onto music this unique is essentially a fool’s errand though (so I’ll stop there). As proficient in the digital world as they are with traditional analogue instrumentation, Plant Plants live show is an intimate combination of hands-on hardware samplers, framed by parallel vocals, guitars, bass and a digital piano. Integral to the tight-knit two-man setup is an array of effects pedals. All samples and effects are fingered and manipulated live as instruments, with not a laptop in sight. Plant Plants prefer to build their songs from the ground up, aiming to provide something more than the usual gig experience.

Plant Plants are a fairly accurate hybrid reflection of what music should be sounding like in 2011. Download She’s No One (here) and you’ll see that I’m either right, or wrong. Such is the beauty of subjectivity.