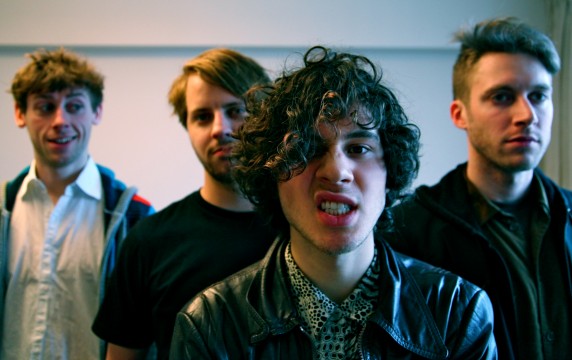 Oberhofer is the surname of the singer, writer and multi-instrumentalist Brad Oberhofer, who had his heart broken just before he left Tacoma for New York to study. Now he wants to tell the world all about it with the help of the three others who make up the ebullient band. Veering majestically between the emotional lows of ramshackle emo and the soaring highs of ecstatic symphony, Oberhofer sound kind of like how Conor Oberst might if he swapped the death dust for space cakes, became one of Wayne Coyne’s heady fwends and burnt down Broadway with the naked flame of a fanfare. Or something.

After 2010’s Away Frm U Oberhofer signed a deal with Glassnote – home to the likes of Phoenix and Kele – who released their full-length debut (Time Capsules II) earlier this year. The band’s blueprint is laid out on the album’s grandiose opening track – HEART (downloadable for free here) which makes use of some sparkling keys and orchestral strings to sound like it could come gushing out of your rickety speakers at the sign of your first moment of weakness and envelop your ears in glittery, beery tears.

Check out the video for Away Frm U below.