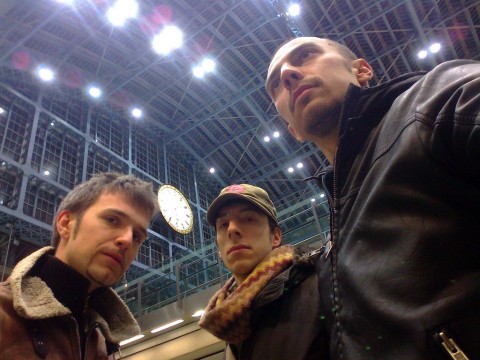 Okay. I’ll admit it. I agreed to let NYLO do this feature without even listening to them. I thought they sounded edgy and/or possibly from New York and besides about 75% of the people who say they’ll shoot some photos for us never actually do so don’t ostracise or vilify me for this oversight – I’m a busy man, my ears are always full and disappointment doesn’t sit well on my slender shoulders (next to this massive chip). I am about to rectify that though by allocating the next fifteen minutes of my life to discovering NYLO. Ready? Then I’ll begin.

I started by grabbing a gawk at NYLO’s website which automatically plays a video therefore saving me vital energy which would have otherwise been wasted on a click (I’m either lazy or this austerity is rubbing off). For a while the full-screen action tricked me into thinking their stubbly faces were actually stuck in my computer trying to get out but then I realised this was both implausible and impossible, but mainly the latter. The track rollicked around in a menacing-yet-amiable way – like a passive/aggressive hooligan on ecstasy and Stella (all occasional threats and warming cuddles) and reminded me of Royal Vendetta (check out their track Soothsayer and see if we’re reading from the same page) and the pomp-opera stylings of (NME’s wank sock) Muse. I then invested my saved click energy (it’s like kinetic cashback) in a visit to their Twitter feed and discovered that they do things like play at The Wheelbarrow with The Megaphonic Thrift. Although I don’t entirely understand this, it sounds awesome. They’re seemingly also gaining momentum on Germany’s Information Super Autobahn Weg too. As my eyes and ears glazed over and my quarter-hour exploration of NYLO ended I exited via their Facebook page where they were posting photos of backstage passes and inviting everyone to make counterfeit copies. Win. Needless to say I didn’t visit their MySpace page.

Anyway, check out these photos. They’re best served piping-hot alongside this free MP3 we’re dishing out to you. It’s called Control. It’s the one I was on about earlier. If you prefer you can get it from the band themselves (here) and then they’ll keep you updated on stuff, but presumably in an inobtrusive, friendly and jovial manner. They’re good eggs like that.