Interview With Not Squares 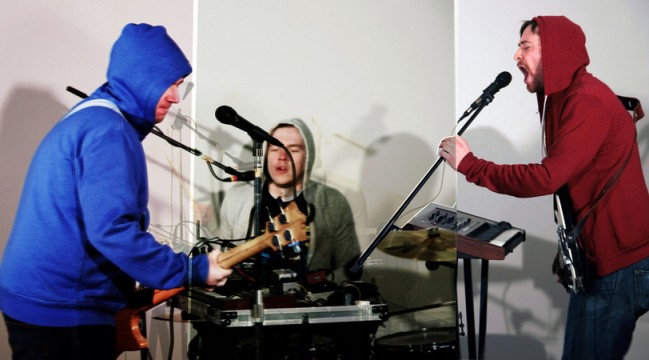 Interview With Not Squares

Having formed in 2008 as a result of a drunken conversation about Belfast’s need for a party band, the Irish trio Not Squares got into a practice room and began smashing snares, yelping indiscriminately and deflowering their synths. Two years on, and off the back of a summer spent smashing the festival circuit into a million little pieces, they’ve just releasing their debut album – Yeah OK.

With recent singles Free The Bees and Asylum already picking up air-play on the radio-box and remix interest from such luminaries as David Holmes coming in, Not Squares are clearly in the ascension. Their album intends to take the body-parts of Gui Boratto and Arthur Russell and clone and splice them into the mutant cyclops lovechild of Soulwax, LCD Soundsystem, Errors and Crystal Castles. If you also throw in some af-faux-beat and disco hallucinogenics, and top it all off with an arm-wrestle with Fugazi and a little snog from The Rapture, then you’re getting close to Not Squares (as well as the longest comparative analogy ever).

Check out these photos they’ve shot for us, crack out this download they’ve passed on (it’s their first single, Asylum), or if you’re feeling like a spot of multi-tasking try both at once. Whichever your preferred method of consumption, you’ll be inching towards a more comprehensive understanding of these bright young things who are sure to raise a few eyebrows in 2011. Their live shows usually end up in wide-eyed dance riots so make sure you catch one soon. They’ll be touring with Two Door Cinema Club and have the whole of the UK and Ireland on their radar. As the name confirms, they’re definitely neither square, or for the consumption of squares, oblongs or rhombi.