A GENRE-ESCHEWING MELTING POT OF NOISE, HEART AND SOUL 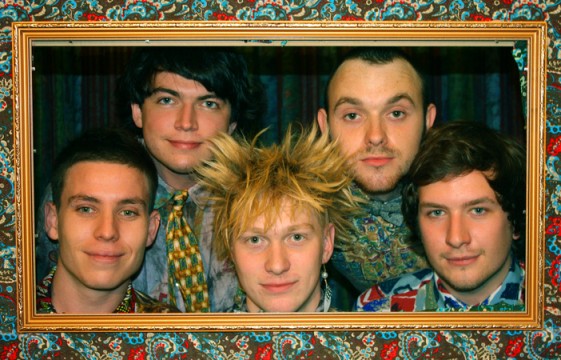 A GENRE-ESCHEWING MELTING POT OF NOISE, HEART AND SOUL

Moody Gowns are an art-pop quintuplet based in Leeds. They make dysfunctionally quirky music which mashes together catchy chops and energetic cleverness into a genre-eschewing melting pot of noise, heart and soul. It has the effervescence and urgency of a young Supergrass and the twisted oddball verve and eccentricity of The Incredible String Band. It is genre-bashing filth with frivolous lyrical embellishments and you’re going to lap it up like a thirsty little puppy.

Moody Gowns first release was recorded with uber-producer James Kenosha (Grammatics, Pulled Apart By Horses, Dinosaur Pile-Up) and released in April 2010. A subsequent year of gigging has seen them supporting King Charles, Chew Lips and Negative Narrative contributors Everything Everything. Now, with Pissedmas lurking ominously round the corner, the band have organised a pre-festive muster (in association with our pals at Dead Young Records) to celebrate the completion of their second set of recordings – an EP to be entitled Sincerely Yours. The event is to be held at Oporto (Leeds) on 7 December. It’s free to get in and Moody Gowns, Cowtown and Post War Glamour Girls will be shredding it up. The EP will be available for purchase on the night ahead of the official release early next year.

The band hope to continue their current trajectory until they are no longer happy in each other’s company. Until that point (where they punch each other’s lights out) you can enjoy these lovely snaps they’ve taken for us, and download the free track Now I See What’s Wrong With School which is taken from their aforementioned impending release.