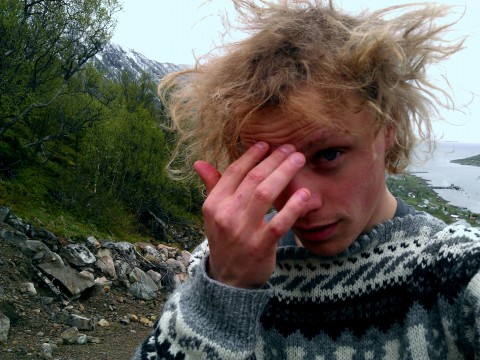 Pål Moddi Knutsen – also known as Moddi – is a Norwegian musician from Senja. With his mother’s accordion, a stolen Russian display mandolin and his own well-worn blue guitar, Moddi makes music that has a life of its own. Sometimes it feels like a huge band session, full of noise and loud passion; at other times it can be so small, quiet, and discrete that you might feel the need to sing along to help it continue. Moddi is good, good people, the type of which the music industry – and indeed the world – needs more of. This is illustrated perfectly in the accompanying notes which came back with these photos and are more detailed than any we’ve previously received:

“Thank you for that beautiful photo task you gave me. I’ve finally returned home, where I have some time to do things that are not shouting at me. It’s been raining here for five days now, and the place is desolate and, well, the photos are probably pretty influenced by that. It’s all home, and it’s all my mobile camera (I was thinking of doing it analogue but it’s too far to the nearest town, so I couldn’t get them exposed). Anyway, I had to remove question nine, “find something to steal”, as there is nothing to steal over here. I could have taken something from the neighbour, but that would be a “permanent loan” and if I stole something from the store here, it would be “credit”, so I wasn’t really able to steal anything.”

Floriography is Moddi’s first full-length studio communiqué and his first album to be released outside Norway. Back in his home nation, Moddi is a critical success having garnered two Norwegian Grammy nominations (Best Male and Best Newcomer in case you were wondering) for his pseudo-acoustic fare. Floriography is an emotionally wrought debut album which rallies unguarded emotions against tranquillity, and is arguably his biggest triumph thus far.

To accompany these lush photos of the far North we’re giving away an MP3 of Magpie Eggs – a track on which Moddi’s coarsely accented voice enchants, writhing in time with the tortured grace of a stabbing string section. Please also read the quotes attached to the photos because they are well, well worth it. Takk.