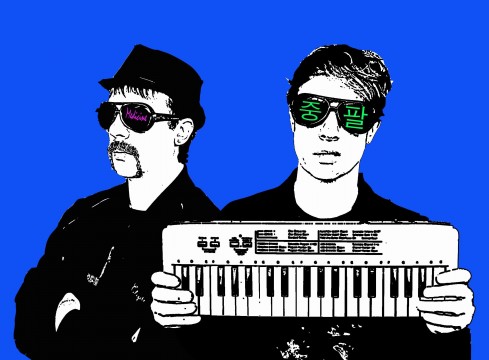 Medicine 8 (AKA Liam and Luke May) are a maverick acid house duo who have been cranking their non-compromising electro-shizzle for long enough now to be partially deaf, mentally fried, posturally troubled and semi-blind from the cumulative years they have spent in dark rooms hunched over decks, faders, mixers and desks. They are clearly our kind of trouble and as such we have history; last month the deadly duo recorded a mint half-hour mix for our Negative_Equity_ series (you can download it for nada here) and we have also previously featured intraviews with their erstwhile cohorts Helmholtz Resonators (here) and Black Daniel (here).

Medicine 8’s debut album (Ironstylings) was released on Regal/Parlophone to unanimous acclaim. It was album of the month in iDJ/DJ Magazine, Mixmag and Muzik Magazine – and included the singles Capital Rocka, Rock Music Pays Off and Mystery Murdered – a highly original Velvet Underground cover which Lou Reed felt bettered the original (“Medicine 8 sent me a new version of a track that only a Velvet Underground aficionado would know existed. They did it so much better than I did and I love it when that happens”).

Apart from gaining the support of all the big name DJs you would expect – and many more that you wouldn’t – Medicine 8 have a diverse range of celebrity fans including Lauren Laverne, Alex Metric and Kylie Minogue, and have spent many years living the dream and playing in the biggest clubs all around the world. They were regulars in Ibiza and at the Miami Winter Music Conference, and have appeared at all of the major dance festivals including Glastonbury, Creamfields and Homelands. As if this wasn’t enough they’ve also found time for a residency at Pacha in Argentina, numerous sessions on Radio 1, and have also remixed tracks for Orbital, Manic Street Preachers, Nirvana, Tiga and Kylie – who loved their mix so much she asked for it to be played when she walked down the catwalk at a Karl Lagerfeld show.

Medicine 8 are now making their much anticipated and long awaited return with new music on their new label Trashmouth Records. You can download Gimme Special Thrills here as a taster of their genius, and check out these Hipstamatic photos they’ve taken for us. You’ll be hearing from them again soon. They’re just in the basement with Johnny mixing up some medicine.