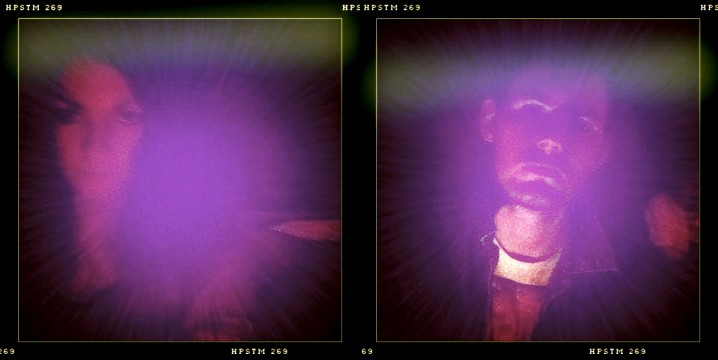 Lovebites are an enigmatic duo (Natalie Stirling and Nikolas XX) who make dark, tense, brooding music not disimilar to that of kindred Leeds-based atmostronica merchants (and Negative Narrative contributors) worriedaboutsatan. By using guitars, electronics, banked beats and big bleeps to create a darker shade of electroclash Lovebites nod knowingly to the electropop of the early 1980s and yet simultaneously tip their brim approvingly to the dystopic, synth-tinted gloominess of the late 1970s.  Think Depeche Mode hoofing lines of ketamine off the still twitching corpse of a recently flat-lined German supermodel in a Friedrichshain warehouse and you’re getting closer (to fully-blown perversion).

Inspired by the cocaine-fuelled new romantic era, Lovebites sound is characterised by portentous lyrical content, alluring bass, close two-part vocal harmonies and ethereal, smack-inspired soundscapes (if you don’t believe me check out Vogue which we’re offering as an exclusive download). Although their sound has been described as no-wave, industrial and future-pop, the duo simply refer to it as new-wave. It’s sparse, vast, beguiling and overwhelming all at once. It is cultish choke-sex. It is as crisp and clinical as a purposeful papercut. It is rewarding and nauseating like hunger. It is as danceable as drunkenness, and as dapper as death. Think Suicide (the band) covering Bowie. Think Bowie doing suicide (the thing). Think Siouxsie and a session drummer electro-mapping the night sky with Robert Smith. You’re edging closer to the truth. If indeed such a thing truly exists.

Check out these snaps they took for us. They’re the darkest we’ve had for a while and will hopefully give you the taste of tinny blood on your tongue, the fear of the unknown in your stomach, and trick your tectchy, troubled feet into tapping out a tango.  You say new wave. I say no wave. He says retroclash. She says industrial. Regardless, Satan says dance, and who are we to argue? Get out your guyliner, tone down your happiness and let’s have a picnic in the shadows of a dilapidated factory. I think it’s where Lovebites would feel most at home and after all it’s their new moon that is rising, waxing , waning and turning blood red, so it’s probably us who should be doing the listening.