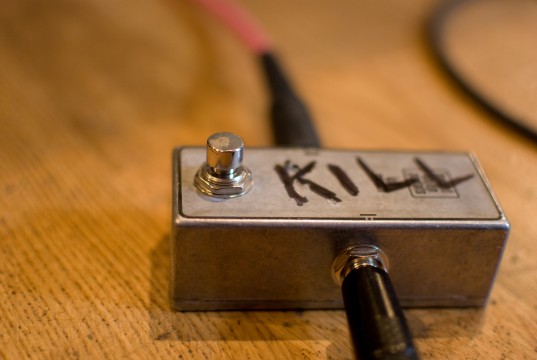 Listing Ships are a nautically-themed, instrumental, post-kraut rock band. They have quickly become one of the most highly-praised, hotly-tipped bands in Oxford, skillfully mixing up ferocious wall of sound guitar histrionics with Holy Fuck influenced electronica grooves and dexterous jazz-influenced rhythms.

Listing Ships’ new EP (The 100 Gun Ship) is a perfect distillation of the band’s various influences. Opening with the furiously euphoric title track and moving into the haunting, chiming Melusine Romance, the scene is set for a brooding, challenging record of great subtlety and depth. The sea theme is key to Listing Ships’ music, as Stuart Fowkes (bass, keys) puts it – “thematically and stylistically, the sea motif ties everything together for us. Structures for songs suggest themselves out of the oceanic theme, and we’ve been collecting samples – both visual and audio – from the sea to inform what we’re doing.”

You can download the EP’s title track here for nowt. Inspired by the first-rate ship of the line HMS Victory, Lord Nelson’s flagship at the Battle of Trafalgar, the song is the story of a 100-gun ship sailing out to battle and engaging the enemy. The coda’s Morse Code SOS is an abuse of history as Morse Code wasn’t actually introduced until well into the 1800s, but they hope you’ll forgive the inaccuracy. I certainly have.

As well as having played storming sets at festivals such as Leylines, Supernormal and Truck, Listing Ships have also supported and shared stages with Health, Fujiya & Miyagi, Karma To Burn, Alexander Tucker, Jamie Woon, The Big Pink and Skullflower in the past year. Listing Ships will be launching their EP at the Wheatsheaf in Oxford on Friday 9 December with a run of UK dates to follow in the new year. Until then, stay salty.