GLACIAL, POLITE, MODEST AND IN NO PARTICULAR HURRY 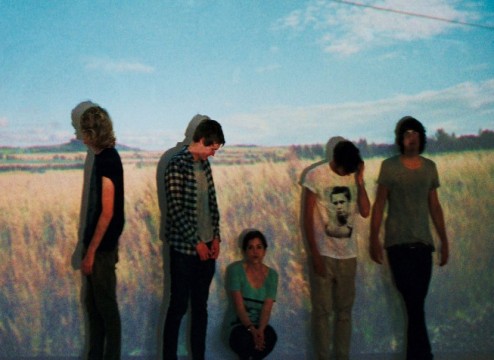 GLACIAL, POLITE, MODEST AND IN NO PARTICULAR HURRY

Let’s Buy Happiness hail from Newcastle though their music sounds more like it has blown in from across the North Sea. It’s glacial, polite, modest and never in a rush – just like our Nordic neighbours. One presumes it drinks like a fish, ages well and is available in flat-pack format too.

Let’s Buy Happiness have been described (perhaps inaccurately) by Drowned In Sound as one of the most ‘thrilling’ new bands around. This is a strange term to use because adrenaline and exhilaration seem eschewed in favour of coyness and shyness in the poppy-yet-sensible soundscapes which the band kick out. Their sparse musical tapestry is presumably designed to allow singer Sarah Hall (who also directs the videos and designs all the artwork for the band) space to supplement the rigid solemnity with her chaffinch-esque clipped chirps. One wonders what they’d sound like without her – they only came together as a five-piece late last year when she barged into her younger brother James’ bedroom and demanded that she be instated as the vocalist in his group.

With three releases to date (No Hot Ashes EP, Six Wolves and Fast Fast) as well as Glastonbury and In The City appearances under their belt, Let’s Buy Happiness are quickly notching up some big game experience and some heavyweight support. As well as these photos we’re exhibiting for your perusal (which the band have taken in response to some questions we asked) we’re also giving away Devil Show to you so you can experience the hype for yourself first-hand. If rumours are to be believed the song is about having a crush on Casper the Friendly Ghost.

You can expect Let’s Buy Happiness’ debut LP to surface this summer. Until then you’ll just have to save your pennies or work on a really good plan for stealing happiness instead.