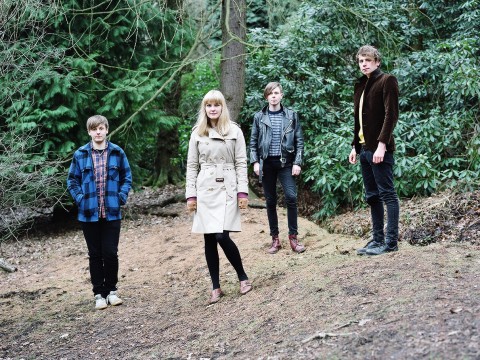 Just Handshakes (We’re British) are a four-piece from Leeds. Cheekily straddling the fence betwixt quivering pop and folky doo-wop their recordings are packed with crisp choruses and saccharin-laden vocals. About eighteen months ago I first approached them with this photo project in mind. Unexpectedly they returned their handiwork to me last week having been suddenly compelled to complete said task via a flash of inspiration/moment of absolute clarity/pang of guilt and went out and bought a budget camera to complete the task. Proof indeed that good things come to those who wait.

The band’s interests and influences veer between Bright Eyes, gin, Chairlift, taxidermy, Maps & Atlases and Sweden and this comes across in their songs which are deceptively complex and unapologetically meander around – all comfortable  and grinning from cheek to cheb. Typified by lashings of syrup-coated backing vocals, skiffletastic drumming and Clara’s twee, laid-back lead (and occasionally elusive lyrics) Just Handshakes (We’re British) have attracted the attention of (amongst others) Steve Lamacq (‘unsigned band of the week’) and Rough Trade East (‘officially one of the best UK indie pop bands around’) and bagged support slots with The XX and Shout Out Louds. Previous releases have come in elaborate home-made packaging and the band have worked with Whiskas (Forward Russia!) as eager and able producer. Whilst we’re dishing out the kudos we should probably also give the band recognition for their name which is really quite fantastic and apt (up the bracket).

You can exclusively download Tenfoots here as an able audio companion to these photos. Next month Just Handshakes (We’re British) will release their new single on Elefant Records (you can hear it here). The four-track single is part of the New Adventures In Pop collection and will be available digitally and on limited-edition blue 7” vinyl. With summer lurking ominously around the corner you’ll be needing an easy-going sountrack, so if a blissed-out mix of Sky Larkin and Ellen & The Escapades sounds like your kind of thing – you’re in the right place.