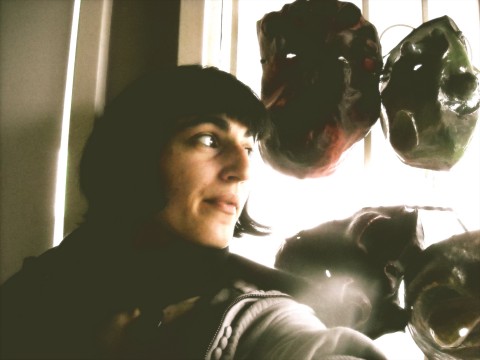 Joanna Chapman-Smith is a powerful young woman who has been making waves on the folk scene for almost a decade. Alone on stage, sitting atop a percussion rig made out of a suitcase and outflanked by instruments, she charms unassuming crowds into singing along and letting themselves get carried away into her world which questions mental dexterity, morals, permanence and impermanence. Her style simultaneously raises a vodka to klezmer music and tips a baguette knowingly to Parisian cafe culture.

Joanna grew up with her New Zealand-born father and Italian-American mother, in a family of six on a quiet street on the edge of Toronto. Her father fell in love with folk music when he came to Canada in 1983, singing his four children to sleep with these songs every night thereby giving Joanna a thorough grounding in music. In 2007 she released her first full-length LP – Eyre Corvidae which was later followed by Contraries in 2009. Influenced by a wide variety of traditions she ties her sound together with a unique vocal style that is equally sensitive and powerful.

Joanna has already been around the world many times playing her music and will shortly return to Europe (and further afield too) for a tour with Mat Martin (The Hobopop Collective). You can find some of the dates listed below (or all of them here). Until you get a chance to catch her live you can gawp in wonder at these images and fill your ears with Melodies. It’s guaranteed good times.

19 May – The Blue Walnut Cafe, Torquay

29 May – The Waiting Room, Stockton-On-Tees