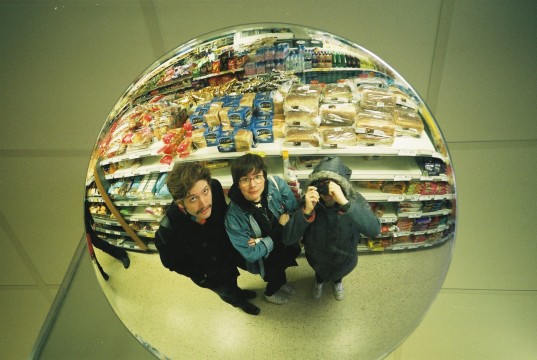 Some people say Internet Forever own both the web and the future. Whether this is true or not I cannot confirm. Here’s what I do know though.

Internet Forever formed in the comments section of an unspecified music blog. Having realised it is impossible to exist without having a digital footprint of some sort, and that in effect everyone can live on the Internet forever, Cambridge-based blogger Heartbeeps (AKA Craig Nunn) and London-based lovely Laura Wolf agreed that they would both like to be in a band called Internet Forever. Shortly after, the two met in person for the first time and composed their first song. Later, Christopher Alcxxk joined on drums, and the band set about winning over the world with their twee-punk distorto-pop stylings.

The band’s first recordings were characterised by waves of distortion, crackly static, popping speakers and vocals that sounded like they were recorded inside a silo. This was seen in some parts as a desperate attempt to be accepted by the burgeoning online no-fi scene. In reality however it was more attributable to the fact that the band had shitty equipment. Maybe it was just because of the name, or possibly because their songs just so happen to be good, but the Internet took to Internet Forever’s sublime racket and teenage ideals like a proverbial duck to water, and the band haven’t looked back since. It’s been quite the education.

Anyway enjoy the snaps and download this track they’ve kindly donated. If you like Craig’s photos – and let’s face it the only way you wouldn’t would be if you had coins for eyes – then you should also immerse yourself more deeply in his exceptional talent via the medium of his Flickr. As an added bonus for you here’s a remix they did for kindred spirits Johnny Foreigner. I’m off to form a tribute band called Ethernet For Trevor and change my name to EWWWan. See you on the other side.