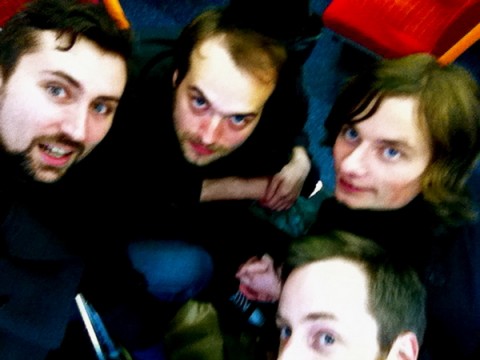 iLiKETRAiNS are a brooding, melodramatic post-rock band from our very own Leeds. They draw inspiration from historical failings – such as Captain Robert Scott’s notorious Antarctic race with Amundsen, or the trials and tribulations of chess-playing mentalist Bobby Fischer – and there is a heavy fug of pessimism that hangs over everything they do. This manifests itself in their compositions which are typified by symphonic pomp, grainy guitar, gritty vocals and climactic crescendos. Although this may sound macabre or sepia-like, it really isn’t. They are in fact celebrating human error and the lessons learned (and subsequently disregarded) through time in an endearing, sympathetic and rousing manner, much like cult favourites British Sea Power or The Cooper Temple Clause (both of whom they’ve shared stages with in the past).

iLiKETRAiNS debut EP (Progress: Reform) was released on Fierce Panda in 2006 with their debut album (Elegies to Lessons Learnt) appearing on Beggars Banquet a year later. Their second album (He Who Saw The Deep) was released this week and sees the band choosing to put it out themselves via the help of fan funding. Musically it is a progression from what has gone before with the band taking the chance to reinvent themselves. This time there is light as well as the usual shade; hope as well as the expected devastation; and they have begun to look forward to where they are heading instead of looking back retrospectively to where they have been. iLiKETRAiNS have also decided to donate a percentage of the profits from their album sales to Friends of the Earth proving that although they may paint a bleak picture, they can still make a difference. You therefore can, and should, buy it here.

For a variety of legal, logistical and miscellaneous reasons we can’t give you out a free track with this intraview, but we can however point you in the direction of the video for the first single (A Father’s Son) from their new album. It’s here in glorious Vimeovision. We’re also massively partial to the ace video for Terra Nova from their debut album too. So tuck in.