Interview With If The Kids

RUSHES THROUGH YOUR VEINS AND HIPS, STEALS YOUR BONES AND LEAVES YOUR SOUL UP ON BRICKS 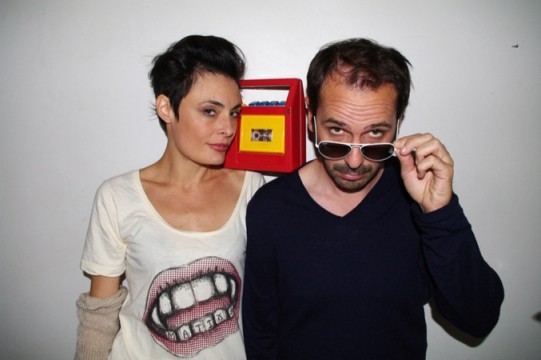 Interview With If The Kids

RUSHES THROUGH YOUR VEINS AND HIPS, STEALS YOUR BONES AND LEAVES YOUR SOUL UP ON BRICKS

If The Kids are Parisian noiseniks Brice Montessuit and Mademoiselle Marine. He is a savvy music-maker carving grooves out of the grim. She is a feisty actress with a penchant for penetrating melodies. Together they have been sending Paris into a cumulative disco-punk rapture for some time now, despite having only met a little over a year ago.

The music they make rushes through your veins and hips, steals your bones and leaves your soul up on bricks. It’s nothing new (see: Kitsuné Maison, Daft Punk, DJ Mehdi, Ed Banger Records) but that doesn’t make it any less enjoyable. Their forthcoming single Tell Me What You Want (out November 15) is layered in strings, synths and hypnotic beats, then lashed with jittering sexual energy. If my patronage isn’t enough then you should also know that Lacoste selected it as the soundtrack for their new ad campaign which will premiere Europe-wide this month. Are you going to argue with a crocodile?

Check out the hip snaps If The Kids took and effortlessly boost your cool credentials just by keeping your eyes open. Playing this free download (Set You Free) in public will also increase your attractiveness to the opposite sex – or the same sex if that’s your thing – by an unfeasibly large ratio. What are you waiting for? Allez. Vamos. Get on it. Before they go on strike or something.