A MISH-MASH OF ORGANIC, ESOTERIC AND SUB-TROPICAL FOUND-SOUNDS 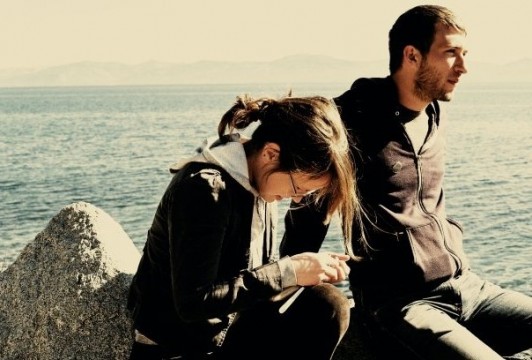 A MISH-MASH OF ORGANIC, ESOTERIC AND SUB-TROPICAL FOUND-SOUNDS

Houses are a couple, though despite their pre-existing romantic ties they only started recording music together at the end of last year following a sudden, unexpected change in his employment status. There’s nothing which catalyses change quite like change, so upon deciding they both needed to do something different they relocated from Chicago to a small, remote cabin in Papaikou (Hawaii) which had no plumbing, electricity or gas. During the day they would work for meals, cultivate microorganisms and learn the basics of sustainable living. When not busy scrabbling to satisfy Maslow’s basic human needs she would paint and he would record music. Over the course of a few months they melted together into one being, sketched out their artistic blueprint in unison and began laboriously committing it to microchip. Unsurprisingly (given their terrain and situation) the music they created channels themes of isolation, a removal from reality and the breakdown of technology. Despite the challenging recording process (they’d have to light candles to save solar power to keep their computer running) their music manages to capture the intriguing, fluid mix of the human voice, a machine and raw emotion, and splice it with something suitably tropical.

After a few months in paradise they ran out of money, fish, water and patience and moved back to Chicago. He put together all the arrangements and field recordings they had made and created their debut album (All Night).  Although the iconography they’ve submitted here may be fairly plain (but indicative of their struggle), their music and story is anything but. Try this download of Soak It Up and you’ll see what I mean.

N.B. I refer to them as he, she, him or her because I don’t know their names. Maybe this is me being lazy, or maybe this is how they prefer it. Maybe we’ll never know. Maybe it just doesn’t matter.