RAUCOUS NEW-KRANK WITH SCANT REGARD FOR YOUR PERSONAL SPACE 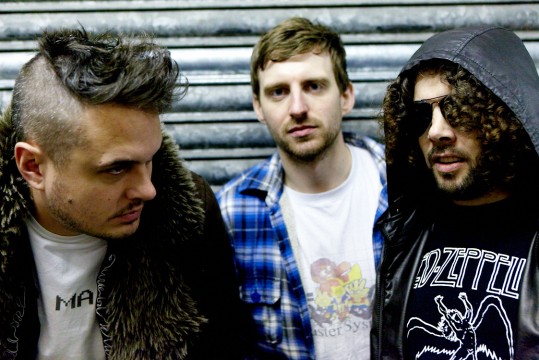 RAUCOUS NEW-KRANK WITH SCANT REGARD FOR YOUR PERSONAL SPACE

Hot Japanese Girl formed in late 2009 to rapturous reviews and have been garnering a reputation for engaging – and occasionally even invading – the audience ever since. With their self-proclaimed ‘new-krank’ they combine a party attitude and plenty of hooks with obscure pop culture references and massive choruses, and have been depicted as equal parts anarchic, shambolic, ridiculous, frenetic and even slightly surreal – all of which are things any good band (or person) should aspire to be. Originally conceived as an internet-only project (like grooming, mail-order Russians and Viagra sales) this notion quickly grew out of control as the band received a glut of gig offers before they’d even found a drummer. Once they’d located a sticksmith they played their first show to a sold-out room in Shoreditch within four weeks and a month later they were co-headliners of Hockley Hustle.

After a slew of gigs and festival dates throughout the UK supporting the likes of Islets and Philadelphia Grand Jury, Hot Japanese Girl are currently mixing their first EP – the inspirationally-titled Bear Shark Laser Tiger Fight – with independent label I’m Not From London Records (see also: Captain Dangerous).

They’re might not be girls, hot or able to speak a word of Japanese, but don’t let a minor moniker mistruth hold you back. Download Conman here to test my theory. I would provide a video for you to gorge your eyes on but I’m doing this at work and trawling the web for a video of a Hot Japanese Girl looks like a whole half-pipe of trouble that I’m not willing to drop-in to. I’ll leave it up to you to make your own mischief in this department.