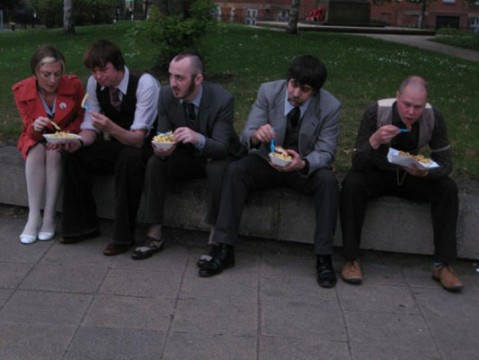 The Hoover Dams sprout from Bradford and spout intense, inflammatory and claustrophobic ‘musics’ which recently resulted in a sound engineer pulling a chainsaw on them mid-set (see the video here). Stalwarts of the Yorkshire scene, and regular nationwide giggers, the ‘Hoovers’ have been exploding, fighting, scuzzing it up and burning anything that will let them (and some things that won’t) since 2005. Intermittently they sound like they were recorded on a C90 which was chewed by a toddler, who in turn was mauled by a pit-bull, which in turn was run over by a caravan. This dirty, lo-fi, guttural growling has landed them a record deal with Cleckhuddersfax-based Belle Records and support slots with fellow noiseniks (and local heroes) Pulled Apart By Horses, Forward Russia! and The Sugars. It’s no wonder the late Frank Sidebottom featured their track ‘Go!’ on his show (here’s the click bit).

Hoover Dams have more edge than a dodecahedron, more depth than Traci Lords’ throat and more danger than a stag do in Kandahar. This is ‘Grit: The Musical’. This is a real band, not dressed in pretence or fads or fashion or obsessed with what the NME would think. Down here at the Negative Narrative clubhouse we value that. These photos hopefully illustrate this, and if you’ll get yourself in the brace position first, we also urge you to treat yourself to this download. It’s free. Because you’re worth it.