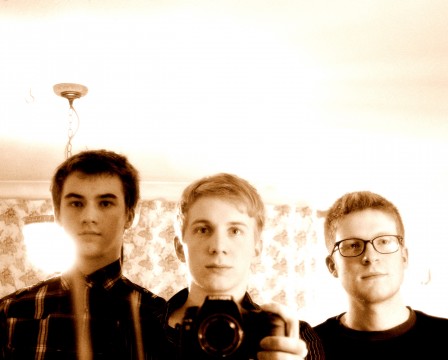 Hermes are teenagers Thomas Jacob, James Dolman and Greg Davies; three friends from Cirencester who have spent the last few years writing, smoking Mum’s fags, recording demos, trying to get served and refining their sound in any space available, be it their bedrooms, kitchens or the garage.

The West Country pop-punk purveyors are set to release their second single (Anyone Who Cares/More Love In Death) later this month. Unbelievably accomplished for ones so young, it’s easy to see why the US have started to fall for their charms. Anyone Who Cares is an intense song about feeling alienated by the ones you love and the insecure sign of coming of age. On the flip side More Love In Death (which we’re dishing out for nowt here) is an uplifting tale of rejecting the dull and welcoming change.

The band supported hypemongous buzzsters Egyptian Hip Hop last October and are due to go back to the capital for some more shows this spring. An album is due to be released later this year so until then, watch this perfectly pixelated space.