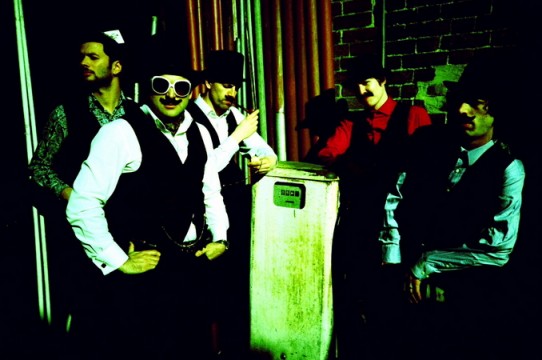 The Helmholtz Resonators are five scientists who have been playing and writing music together since meeting at university in London around the turn of the century. It was here that they studied acoustic science together, particularly the work of Hermann Von Helmholtz, from whom they take their name. Before we go any further (and just so you can say that you’ve learnt something today), I should point out that Helmholtz resonance is the phenomenon of air resonance in a cavity – like the sound created when you blow across the top of an empty bottle.

When they’re not at work in the laboratory they make psychedelic garage music that would make Albert Hofmann turn on, tune in and flip out in his grave. It is definitely not mainstream but does have elements that are aurally infectious – big heavy bass lines, battered beats and repetitively bouncy chorus refrains. Think Add N To (X) burning magnesium with Kasabian and Black Daniel and you’re nowhere near, but edging slowly closer. Their debut album (Crystal Submarine) is out now. It’s inspired by the sound of the organ, the friendship they share, cream-cheese and oscillators. It’s had the remix treatment too, the results of which are unsurprisingly genial and experimental (hear here). Mixing art and science, sound synthesis, big beats and fuzzy bass with English eccentricity and determination, the band have recorded, produced and released everything themselves to date (including their videos), hoping that their experiments with sound can help brighten and expand future minds. Although the results of this long-term experiment will not be seen until the next generation reveals itself, I can confirm that early indications show their work is proving to be both ground-breaking and influential, even away from their scientific peer sphere.

Being the open-minded innovators that they are The Helmholtz Resonators agreed to our hypothesis and decided to participate in our little experiment in imagery. The results are shown. They’ve also given us this algorithm of tuneful resonation (Little Boy) to pass on to you – our carefully sampled research population. As we’re in the company of such learned individuals, I feel I should end this profoundly and relevantly.

“The scientists of today think deeply instead of clearly. One must be sane to think clearly, but one can think deeply and be quite insane” Nikola Tesla