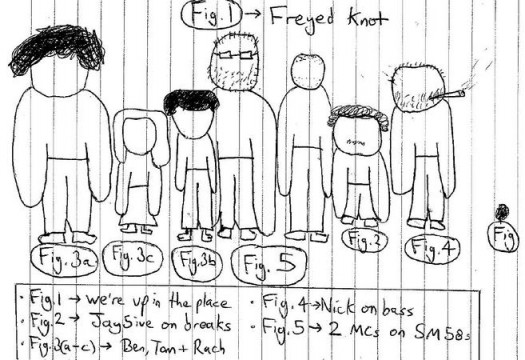 Freyed Knot are from Bradford and are here to hang out in our digital flop-house for a triumvirate of reasons. Firstly, they’re here to continue our theme of agitable proles, political dissatisfaction and simmering civic discontent (see also: Three Colours) – the like of which, in case you hadn’t noticed, is currently reverberating and ricocheting around this uncomfortable, itchy island. Secondly, they make great British hip-hop in a reet proper Northern style which owes a small debt to Nightmares on Wax, takes influence from Braintax and nods knowingly at Rae & Christian. Thirdly, they’ve brought something new and inspired to our digital table and have drawn, sketched and scribbled their intraview answers in the style of Tony Hart copying David Shrigley drawings with Ol’ Dirty Bastard’s Crayola set.

Freyed Knot’s music is actually a fused mish-mash of funk, jazz and hip-hop and is an intricate audio jigsaw which represents the band’s component parts. The seven-piece is made up of nationally-established hip-hop MCs ExP and JND, Leeds College of Music alto and baritone saxophonists Tom and Rach, guitarist Ben II, NTR on bass and Jay5ive smacking skins. MoreFire is Freyed Knot’s second studio album and was recorded with Bruce Wood (which may explain the Nightmares on Wax comparison) and features UK DMC champion DJ Rasp and Northern beatbox genius Ball-Zee.  You can buy it here for £1.50 (and that includes all your P & P). If you feel that is too expensive (maybe you’re also from Yorkshire and the type who uses teabags twice) then here is a free sample for you. It’s called What For and it also features the talent of Lunar C and Angela Bellis.

So yeah. Check it out, blaze one up, burn one down and witness the Bradfunk before we rip this motherfucker down and put you all in lock-down. Or something.