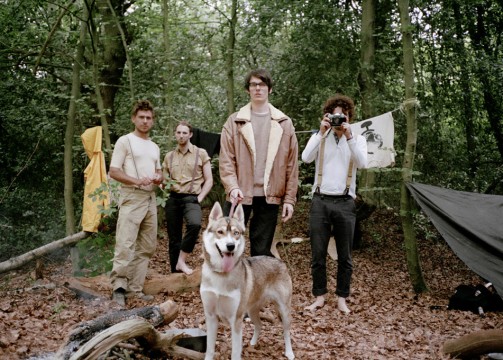 Foreign Office are Paul, George , Duncan and James, though how relevant this information is to you is debatable. They are based in Hackney and make music which draws on a cacophony of influences from 1960s soul via 1970s funk to 1980s post-punk. They have steadily been making a name for themselves on the live front (they’re currently on a UK tour so why not go and see for yourselves) and pride themselves on being ‘a glorious misrepresentation of the establishment’. Hence the mildly misleading name I guess.

Today Foreign Office are releasing their Alaska EP onto the unsuspecting public. It has – quite refreshingly in this age of binary-guided, digital-sharpened everything – been recorded live. That’s right – no tweaks, added sheen or post-production. Just good ol’ fashioned tunes laid down in organic unison. To supplement the EP release they have also cobbled together footage from their summer shows (where they supported Wolf Gang and – ahem – Erasure, amongst others) into a lush video (below). The lead track is Hands & Knees which we’re giving out for nowt just here. It’s basically a big synthy pair of balls slapping sloppily against a hefty rump of manic guitar in a frenzied moment of audiogasm. If that’s your proverbial bag (and why the hell wouldn’t it be?) then you can download the full Alaska EP for free here. Vamos. Hasta luego. What are you waiting for? If you’re looking for diplomatic immunity or a tourist visa you’re in the wrong place.