REDEFINING TRUTH AND RIGHTEOUSNESS VIA THE MEDIUM OF MATH-ROCK 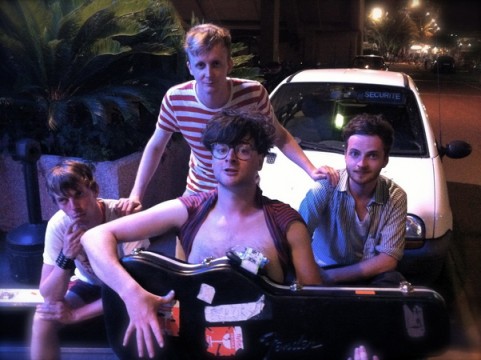 REDEFINING TRUTH AND RIGHTEOUSNESS VIA THE MEDIUM OF MATH-ROCK

Errors are not normally something I tolerate (just ask the bumblingly incompetent copywriter strung up in my cellar with his nipples clamped to the lawnmower) however in this instance I’ll turn a blind eye, but only because this Glaswegian post-electro band aren’t unintentionally deviating from what is correct or right. They are in fact, purposely redefining truth and righteousness via the medium of math-rock.

Formed in 2004 by Simon Ward, Stephen Livingstone and Greg Paterson, Errors made a name for themselves in their hometown with their unique spiky new-wave guitars, pop hooks and acid-house sounds. The band were soon taken under the wing of Mogwai who signed them to their Rock Action label and put out their first 7” (Hans Herman), which sold out quickly. The band followed up this success with the release of the How Clean Is Your Acid House? EP a record that saw Errors raise the bar in terms of ambition and scope. Following this the trio became a four-piece, inviting long-time friend and collaborator James Hamilton (ex-Dananananaykroyd) to join the group as a permanent member therefore adding a whole new dynamic and focus to the band’s live performances. In 2007 the band set about work on their debut album and, resolving not to fall into the trap of repeating themselves, decided that the LP would consist entirely of new material and would be a ‘proper’ album in contrast to a simple collection of their output to date. A period of recording, mixing, touring with Underworld, re-recording and remixing followed before finally in June 2008 It’s Not Something But It Is Like Whatever was released. It’s a record which not only draws on the unique sound that has become their signature, but builds on it; a merge of angular guitars, spiralling, euphoric synths and informed dance sounds underpinned by mesmerising rhythms. Errors have managed to take on entire genres and in doing so, create one of their own.

To coincide with their current co-headline tour with The Twilight Sad, Errors have announced the release of a limited 12″ of remixes from their latest album Come Down With Me. The record, which will includes remixes from the likes of Mogwai and Gold Panda, will be available during the tour and in a number of independent record shops. They’ve also taken these snaps for us and given us an excellent track (Beards) to whet your proverbial appetite. So mash it in your grill now. It’s got to be one mistake worth making.