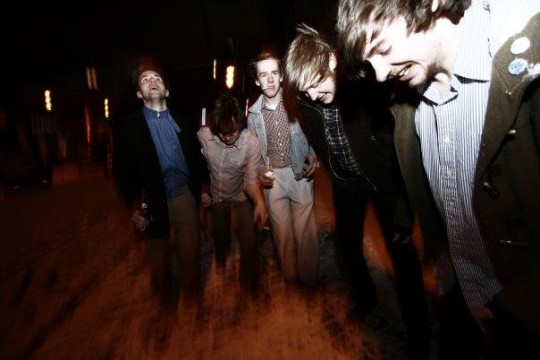 Alongside fellow Negative Narrative contributors Everything Everything and bands like Egyptian Hip-Hop and Hurts, Dutch Uncles are at the forefront of the ‘new wave of new wave of no wave’ Manchester bands, who are starting to gain attention for their innovation, intelligence and down-right danceableness, enabling the city’s considerable civic ego to swell once more, and encouraging it to break free from the draining dominance of sub-Oasis lad dirge which has hung over the city like a sweaty, lairy smog for years. But how can Dutch Uncles be so different I hear you ask? Well here’s your starter. I think it’s safe to say that their World Cup song (Fabio Acapella) is unlike anything you’ve ever heard before. Hear it here. If I’m wrong you can piss in my pasty.

Comprising of a quartet of very old friends, the original band line-up was augmented with the addition of singer Duncan Wallis via an audition no one remembers organising. Dutch Uncles have subsequently fostered an unconventional approach to almost everything backed up by a frenetic and energetic live show, which has gained the band support tours at the personal requests of the likes of Bombay Bicycle Club and Maximo Park. This summer Dutch Uncles are preparing their ‘proper’ debut album (they have already released material on a German indie label). It’s assumedly safe to say you can expect progressively jerky alt-pop which blends complex mathematical compositions and off-kilter time signatures with floating, jittery melodies. Pulling unlikely influences from Talking Heads, XTC and King Crimson the band have an unconventional approach to song writing with individuals scoring tracks as sheet music. Although these influences don’t shine through as such in their final output, they do show that Dutch Uncles are trying to do things differently in terms of rhythm, melody and overall composition. Which is just dandy with us.

Check out these photos they did for us here. Unbelievably it’s taken 51 ‘intraviews’ for someone to show us some breastage. Download this track (OCDUC) too. If nothing else it’ll help erase ‘Some Might Say’ out of your head forever. Which can only be a good thing. Tot ziens!