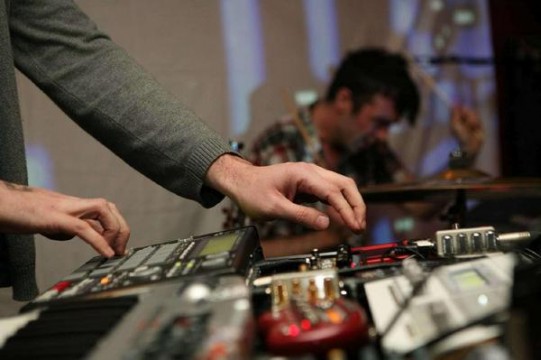 Whilst you are reading this long-time collaborators and childhood friends Tom Hanley and Max Whatley are probably colluding in their London garage; eeking out some tension and pondering their next steps as create electronic duo Drugg who have just released their debut EP (Shackled) through independent label Less Music.

Drugg, buzzing off a background in experimental noise, create multi-layered electronica and flit effortlessly betwixt glitchy minimalism and beaten-up soundscapes. The addition of vocals and live drums lifts the music to the next level which nods to (as everything seemingly does nowadays) new-wave, no-wave, now-wave and post-rock. It’s upfront techno with a distinctly dubby swagger and their EP has already been championed by Berlin-based minimalist dub DJ and producer Pole (AKA Stefan Betke) who, upon hearing the record, instantly offered to master the whole thing.

With a few live shows under their belt (that were mostly improvised) Drugg aim to further develop a live set for 2011 that will combine atmostronic compositions and live improvisation. For the time being though you’ll have to make do with these photos and this Visions Of Trees Remix of Crooks which we’ve managed to blag for you. It’s the sound of dystopia decanted into deeply dubbed-down incantations.