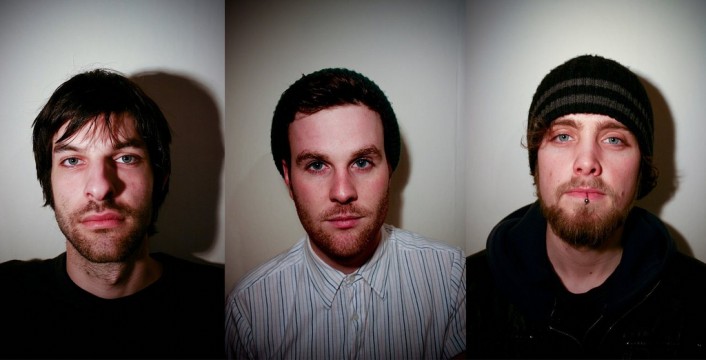 Since Pulled Apart by Horses and Dinosaur Pile-Up emerged a few years back and unceremoniously smashed LS6 a new smile-hole the noise-punk/thrash-fuck/hair-metal vibe has been spreading around Leeds like smallpox in the Sudan. Double Muscle are the newest addition to the scene and have been signed to Best Enemies Records – a slacker-micro record label based in Leeds run by “100% concrete dickheads” (their words, not mine).

Double Muscle are a trio of wiry, lo-fi, scuzz-punk ramblers who ejaculate snappy and furious blasts of pop-punk which will no doubt tickle the balls of Minutemen, Superchunk and Dinosaur Jr. fans. They turn their abrasive riffing to a head-buckling maximum and – though they are no doubt indebted to the American sludge-grunge scene – they have somehow carved their own hardcore niche and managed to avoid the pitfall of imitation. If you can imagine what Stephen Malkmus would sound like if he had been brought up on a diet of Morrison’s, crisps and 21st century post-hardcore whilst hanging around the West Indian Centre with Gang of Four and the slightly demented step-brother of The Wedding Present then you’re edging closer to the truth, whatever that means. Having just released their debut EP (Jail – you can get it here) to rapturous applause and muted screaming, 2011 should see Double Muscle take their seat alongside the new breed of exciting and progressive noise being exported from our fine city.

Treat yourself to a peak into their world through these pictographs, download Spanish Way to bring your ears up-to-scratch and be sure to catch them at Live At Leeds where they’ll be playing at The Cockpit at 14:30. We’ll see you down the front, amidst the sweat, grit and purposely-ripped jeans.