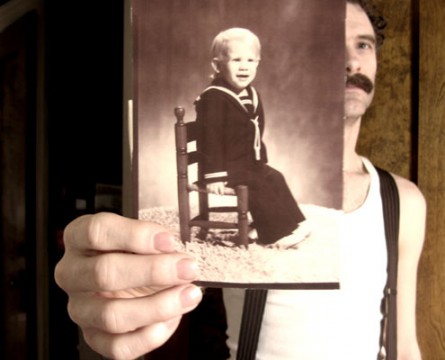 Mom. Dad. There’s a stranger in the yard. But fret not because that stranger is actually Curtis Eller, and Curtis Eller is the pooch’s hooch. There are few men that can rock a wife-beater, ‘tache and braces with as much panache, aplomb and authenticity as New York City’s (self-proclaimed) angriest yodelling banjo player.

Curtis was always destined for the spotlight, having begun his show-business career at the age of seven (as a juggler and acrobat in the Hiller Olde Tyme Circus, which his father ran). Nowadays he sings a good ol’ story up against a plinkety-plonk backdrop of oddball Americana, and stubbornly performs (either solo, or with his band – The American Circus) at wakes, vaudeville revues and punk-rock toilets.

For these pictures which he has taken for us, he has borrowed heavily from his unique collection of vintage photos and daguerreotypes. I’m sure you’ll agree they suit his style just dandy. Oh – and he’s just won the spot-prize for the best profile picture. Check out his Guthrie-gone-Gogol Bordello aceness here, with a free download of After The Soil Fails.