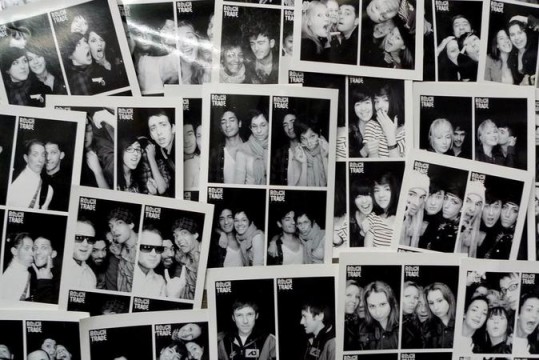 Our Father. You art not real . . . so instead allow Negative Narrative to distribute the daily digital bread, which comes courtesy of Brooklyn’s finest Common Prayer. As there’s two of them (though sometimes as many as eight disciples), they’ve taken a rather unique split-screen approach to some of their snaps, most of which were obtained on their recent, mini-tour of the UK.

Having formed the band early last year, Jason Sebastian Russo began putting songs together through mistuned guitars, found sounds and a clapped-out piano in an even more clapped-out milking shed. What came from this rural DIY experimentation was the collective/band/audio timeshare that is Common Prayer and, eventually, their debut LP – There Is A Mountain – which is one of the best little-know releases of the year thus far, and deffo a platter to mash into your grill if you’re a fan of Atlas Sound, Broken Social Scene or Mark Linkous (RIP).

Please lead us into temptation and deliver us some evil . . . Satan is, after all, my homeboy. Given Jason Sebastian Russo’s past as a member of psychedelic sorts Hopewell and infamous drug-poppers Mercury Rev, it was always likely that Common Prayer, though a distinctly folkish proposition, would be far from ordinary. There Is A Mountain is an ambitiously layered, pseudo-genial work of incredible depth and tangent, that delicately self-smelts into a uniformly cohesive mass, peppered with chattering percussion and lashings of accordion which dance boozily around whispered samples and groaning organs. If you like things deep, open and non-standard issue, then this is the trip for you. You can buy it here.

For theirs is the kingdom. The power and the glory. Forever and ever,  a man and a woman (sometimes many more). Making music. That’s truly great. Try this sample (Us Vs. Them) for starters. It’s an audio fish to feed the five thousand. And please spread the word. Because that’s how all volitional connections start and Common Prayer, as an entity to believe in, are clearly worth shouting about.