A MAELSTROM OF POETIC SINCERITY AND SPINE-TINGLING FRAGILITY 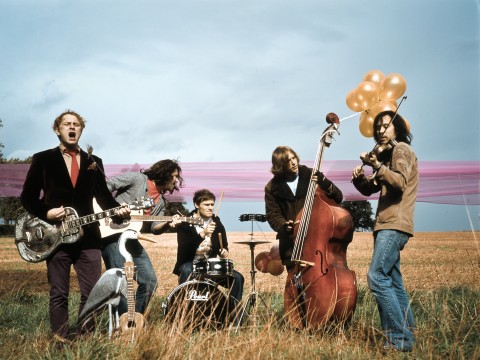 A MAELSTROM OF POETIC SINCERITY AND SPINE-TINGLING FRAGILITY

Captain Dangerous are an explosive art-pop band from Nottingham who muddle contagious quirk-pop anthems with a maelstrom of indie-rock sincerity, laconic poetry and spine-tingling fragility. Think Pavement at their most mainstream and Darren Hayman at his most tender meeting Blur, Hope & Social and The Clash for a jaunty knees-up in an English country garden and you’re edging closer to the precipice of enlightenment. The five piece was originally the brainchild of Adam Clarkson (guitar, ukulele and vocals) and multi-instrumentalist Miles Clark (guitar, trumpet, melodica, accordion, violin and vocals) but – realising that they clearly didn’t play enough instruments – they soon enlisted the talents of bassist Mark Houlgate, drummer and percussionist Jamie Elliott and accomplished jazz/classical violinist Rob Rosa to create the bristling energy and richness of sound which is now synonymous with the band.

Following their signing to I’m Not From London Records the single Forgive Us We’re British/Everything Beautiful Reminds Me Of You was released to critical acclaim last summer and has already featured on the soundtracks of several TV shows. The single was triumphantly launched at a sold-out homecoming show at the Rescue Rooms where the band swelled to a thirteen-piece. You can download the latter track here for the special discounted price of absolutely nothing.

The band have mopped up further fans supporting the likes of Ash, Marina and the Diamonds, Los Campesinos!, Mystery Jets, Everything Everything, Lightspeed Champion and The Holloways, garnering a hard-won reputation for uniquely heartfelt lyrics and joyous emotional pyrotechnics. They have also recorded a number of live sessions for BBC Introducing (see below), have been part of the Levi’s Ones To Watch Tour and have also been championed by 6 Music’s Tom Robinson and Mark Riley. Captain Dangerous are currently putting the finishing touches to their highly-anticipated debut album (due out June 2012) which is produced by Swimming’s Andy Wright. As a stop gap for fans that can’t wait for the full length long player, a limited edition acoustic album (Captain Dangerous At JT Soars) is currently on sale at their live shows. The band are also currently accepting bookings for the 2012 festival season.