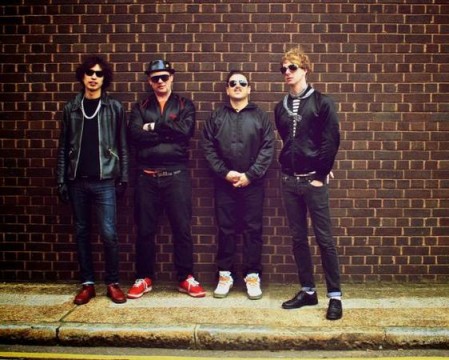 I’m confused by exactly how many folk are in Black Daniel. I think even they are most of the time. It doesn’t surprise me though, because as these photos show they are quite clearly having too much of a good time to care for frequency, continuity or quantitivity.

What I do know is that the (hard)core members of Black Daniel are brothers Luke and Lamik2000 from Lahhhndan and Craig Louis Higgins Jnr. from New York (via Cape Cod). Meeting for the first time on the dancefloor of a Lower East Side disco, they swiftly garnered a shared understanding and bond through a mutual love of animal tranquilisers and long walks in the rain. Some would say forming a band seemed like the logical progression, but it took a tour of the United States of Stateside with the brothers masquerading as DJs and C.L.H. Jnr. doing his own special brand of tour management before the inevitable finally happened. Sometimes something just feels right. This clearly wasn’t one of those times but they did it anyway. They formed Black Daniel and from that moment on it’s been a series of Japanese stage invasions, cow bell solos, bloodied microphones, blow-up dolls, leather pant experiments, wigs and wood nymphs, culminating in support slots with Kasabian, We Are Scientists and The Juan MacLean, and near constant gigging in this decrepit country’s smug, smoggy capital.

The ‘musics’ that Black Daniel make are noises which they themselves describe as ‘pulling tape off a hairy chest mixed in with a little bit of Old Spice leftover from Grandpa’s treasure chest’. To re-para-plagiar-phrase I would add that they are leftfield, but without audience alienation, and off-kilter, but with commercial prospects. But who gives a fuck what I think, just listen for yourself here, with a free download of Look Away Sancho.