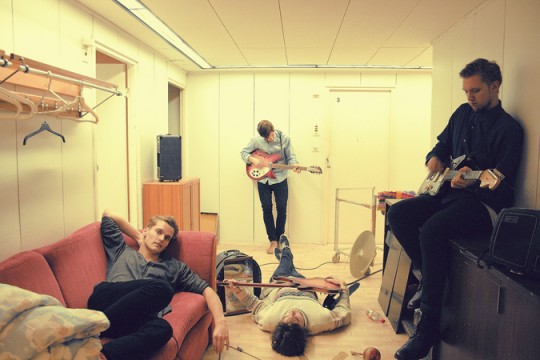 Recently, presumably bored by the dusty plains of earth and the confines of mud, concrete and land, musicians have increasingly been looking to the oceans for inspiration. The focus has specifically landed on surfing – from MGMT’s (actually-rather-good-despite-what-the-masses-say) second LP, to the nauseating drivel of The Drums. Continuing this theme are Big Wave Riders, who, as the name suggests, don’t bother with little surf. Instead they sit, waiting for the monster sets to swell, like Neptune’s naughty nephews.

Having formed the band as recently as last April, this Finnish four-piece are bursting with ideas and vivacity. Their game plan is to make fresh, edgy music which shares the energy of garage and punk, but fuses it with the inspiration they derive from waves and echoes. This manifests itself in straight-up, balls-out, rock ‘n’ roll, which nods to new-wave, no-wave and shoe-gaze, whilst retaining a certain danceability through their harnessing of experimental, electronic  rhythms.

Taking time out from being all gnarly, rad and salty, Big Wave Riders have shot some snaps for us. They’ve also given us a free track (Big Sound) for your listening pleasure and to give you an idea of the foamy tubes and barrelling audio walls they create. If, like me, you like what they’re doing then let’s wax up, paddle out and surf this beach together. Bro.