Interview With An Horse 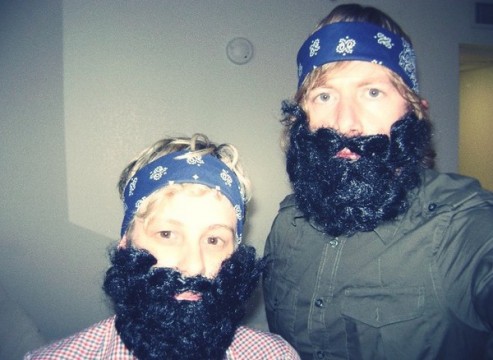 Interview With An Horse

An Horse make ‘an’ utilitarian, testosterone-laden din which is high on urgent energy, rabid beats and spuzzy riffs, and will invade your ears, permeate your brain and infiltrate your whistle before you can say ‘bad grammar’. Like other noisy duos – such as The White Stripes or Youthless – An Horse utilise very little to create something that sounds unfeasibly gargantuan.

The Australian duo (Kate Cooper and Damon Cox) are bass-less and base-less, yet formed in a basement (of the Brisbane record shop they both worked in). The pair swiftly gained momentum and interest and, after opening for Death Cab For Cutie in Australia and Silversun Pickups in the UK, they were signed to Mom + Pop Records (home to hypemongous buzz-bands like Sleigh Bells, Metric and Freelance Whales). In 2009 An Horse released their debut album (Rearrange Beds). By now veterans of the open road they took North America, their native homeland and Germany by the reins and rode hard. Just to really make things interesting, and just as the touring began to subside, Kate moved to Canada and Damon went back to Oz. They decided (and logistics dictated) that their follow-up album would be written from separate continents and they got busy emailing each other audio doodles and demos of songs. Last summer saw An Horse relocating temporarily to Vancouver (neither of them actually live there) to record their new album, which is produced by Howard Redekopp (Tegan and Sara, The New Pornographers) and will be released in the UK when this frost finally melts sometime next spring.

Before that An Horse will be releasing the five-track Camp Out EP. It features songs from their debut album plus three new remixes (including a TV On The Radio reworking) and is intended to act as a stepping stone between both of their albums. Until then you’ll just have to be content with these lush photos they’ve taken for us, and wrap your ears around this acoustic version of Camp Out which they’ve asked us to pass on to you. It’s ‘an’ big bag of fucking awesome.