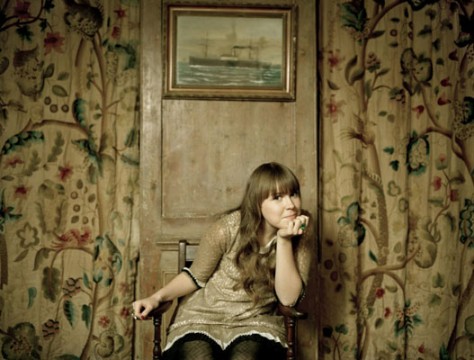 Alessi’s Ark is the vehicle for the epic, tender, heartfelt songs of 18 year-old Londoner Alessi Laurent-Marke. Clearly a prodigious talent Alessi has already recorded her debut album (Notes From The Treehouse) with none other than Mike Mogis (Bright Eyes, Monsters Of Folk), and shows an elegance and sophistication way beyond her years, despite the fact she only learnt the names of chords whilst making this record. Her ethereal voice speaks of magic and nature, and is backed by swooning strings, fairytale imagery and baroque arrangements. Being so young, inspiration comes from books and films as much as it does from her own experiences.

You can download her cover of Lynryd Skynrd’s classic Simple Man here, and no doubt draw comparison to Joanna Newsom, Kathryn Williams and other similarly spine-tingling chanteuses. Then check out her lovely pictures, and if all these little mediums are adding up favourably in your head to something equal to (or greater than) LUSH, then go and see how her live show has developed from a 1960s style happening into something far grander, but no less warm. Anchors up and man the rigging. This ark is setting sail. Expect big things in 2010 and beyond.