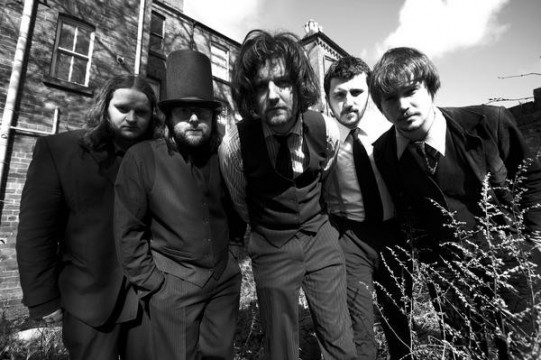 There’s an ongoing pseudo scene in the outdated amber streetlight-encased backstreets off the beaten track of our major cities and surrounding towns. In the vaults of their seemingly less-frequented boozers, while you might initially expect to find your entrance met with rheumy-eyed animosity, you’re almost as likely to find a band playing taut renditions of standards from 60s rock’s red-headed stepchildren. If you’re really lucky you might even be blessed with the presence of an ex-member of one of the transitory incarnations of Captain Beefheart’s Magic Band, or an alumnus of Frank Zappa’s Utility Muffin Research Kitchen. If so, the band in question would be Liverpool’s The Muffin Men who, since their inception in 1990 can likely be held responsible for fostering an aging ‘alternative’ community that has seeped-into and overtaken certain CAMRA-sanctioned Public Houses across the land.

On the eve of the 2000 U.S. elections (that would ironically see that Bush-cunt fuck-up the world with a retrogressive administration peopled with figureheads shackled to the detrimental ‘ethics’ of it’s incumbents from the Reagan-era Zappa railed against), in one such pub (The Thatched House, Stockport) I met ‘The Mothers of Invention’s ‘Indian of the Group’ Jimmy Carl Black. He was incongruously parenthesised by two twenty-something blondes whose sweet nothings I managed to squeeze past a request for an autograph. The solitary men’s room cubical of The Thatched (now sadly closed; protection rackets coupled with a patronage of Hells’ Angels and neo-Nazis it turns out, are a toxic combination), sports the only example of my tiling skills in evidence on planet earth. The mint green tiles above the toilet’s cistern may shift shape and hue, but despite this disparity it’s a fucking good job, at least, not bad for a first timer, and has the desired effect of masking whatever abrupt confluence of events saw its forbears smashed from the wall.

The Cubical hail, like The Muffin Men, from Liverpool, and seem to have clasped the baton, paying homage to the 60s’ smirking alternative to their City’s most beloved sons (even The Zuton’s name is derived from Magic Band member Zoot Horn Rollo). While The Muffins’ onstage oeuvre swings predominantly in favour of Uncle Frank, The Cubical – while playing wholly self-penned setlists – can’t shake comparisons to The Don, given that frontman Dan’s vocals are as earth-shatteringly akin to Van Vliet, as his were to the Howling Wolf.  Unlike Van Vliet though (whose vocals found themselves surfing increasingly erratic and abstract tides of his own design), The Cubical play it safer than milk, dabbling in the shallows, replicating not Trout Masks but rather The Magic Band’s more palatable albums. It Ain’t Human has cover art reminiscent of a record by (the forward-thinking, Van Vliet-inspired) The Fall, and is unarguably Beefheart-inspired, but only so far as their most crowd-pleasing, foot-tapping output. This in itself is no bad thing – The Cubical deftly compartmentalise their own musical simulacrum of the mutated blues from Safe As Milk, Clear Spot and The Spotlight Kid, which is destined to play well to the aforementioned amber-wrapped mosquito-enclosures, but with that discipline in mind, you can’t help taking umbrage with it’s blinkered view of avenues new.

The album kicks-in with the irrepressible Delta stomp of the brass-emboldened Ain’t That A Shame sounding red, white and new in its old black-blues, while second song Rag Time Army invokes in the listener what one might imagine The Further Adventures of the Zig Zag Wanderer to sound like. Third track Are We Just Lovers sees enough of a shift in Dan’s gravelly vocal acrobatics to hold interest and hope for a sea-change into different territories. Falling Down leads us into the record’s paunch with a laconic bar-soaked, piano-driven admission of watching the world go by, gawking from the porch. By the album’s mid-western belly button (Worry) Dan Wilson has shifted from Captain-to-King, with a tremulous, Presley-esque baritone invocation which treads back to Beefheartland during An Ode to Franz Bilberkopf before tipping irretrievably into the album’s most ironic song Something New – which is so redolent of Big Eyed Beans From Venus that you abandon any of hope of the band fulfilling their own chorus’s demand, and surrender to the fact that The Cubical will most likely malinger in Beefheart’s shadow for the remainder of their days. Which, as I’ve pointed-out, isn’t all that bad; there’s an enduring audience that means they’ll be well looked after and it’s no great shame to labour there rather than invade the flailing, day-glo mainstream. They’re the ill-fitting mint green tiles my generation has haphazardly plastered into the middle of the intrinsic mint-green periphery of yesteryear’s stubborn pubs.

“A furious cock in the Ocular Socket of the Meh Generation“