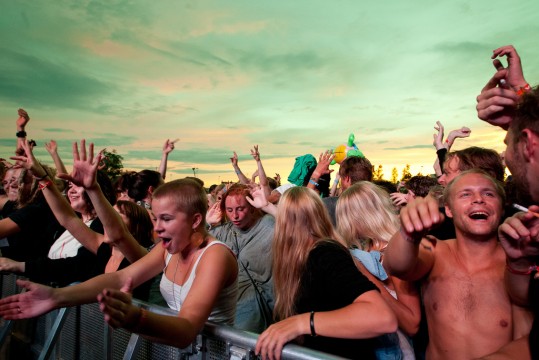 Øya Festival sounds fucking mint. Not only does it have that uber-cool slash thing through the O (which for the record is a monophthongal close-mid front rounded vowel) but it’s held in Norway and, as a Scandiphile Scandophile Scandaphile person who’s obsessed with almost all things Scandinavian (you can rule out IKEA, pickled herring and wolves), I’ve always longed to visit to indulge in some seriously dangerous Viking-style drinking and to catch-up with some twinkly-eyed old friends. What better excuse then than a festival of music, especially if said event promises an ‘energetic and symbiotic experience with a unique atmosphere and audience that bears resemblance to no other’. It sounds like an informal apocalypse for discerning mentalists and I for one particularly like those apples.

Øya is held in a picturesque medieval park surrounded by sandy beaches, pellucid fjords and rolling hills. Amidst the festival area of trees, lush grass and glacial water, guests dine almost exclusively on organic and locally-sourced food and drink. The site also manages to facilitate an exciting splice of nature and culture, being just a short walk from the centre of Oslo. It is these sort of credentials that have earned Øya official recognition as one of the greenest festivals in Europe.

As well as the obvious aesthetic, environmental and cultural value, there are also significant aural benefits to be enjoyed with more than two hundred bands playing over one weekend of eternal sunshine (9-13 August), where the days are long, the smorgasbord never ends, and the sound of shared skols echoes raucously into infinity. 2010 saw standout performances from the likes of reunited lo-fi darlings Pavement, M.I.A (who hopefully put more effort in than her karaoke farce at The Big Chill), insurance specialists Iggy & The Stooges, Negative Narrative contributors The Flaming Lips, the almost defunct LCD Soundsystem, The XX, The (always-jaunty) Specials, and the euphorically gloomy pomp of The National.

The first confirmed acts for 2011 adhere to Øya’s firm belief in showcasing the hottest and most diverse artists from across the globe. Fleet Foxes were the first headliner announced and with their sophomore album being one of the most anticipated of the year they’ll be hoping they can recapture the majesty of their memorable set in 2009, where they played as the sun went down over the lake. Joining them as headliners will be Sheffield’s very own grown-up misfits and iconoclastic Britpop forefathers – Pulp. The line-up is further complimented by alt-country legends The Jayhawks, blogmongous buzz-band Warpaint and Texan post-rockers Explosions in the Sky, with many more acts to be confirmed over the coming months, all of which should help Øya push sonic frontiers to within an inch of the Arctic Circle. To be honest though, even if the line-up consisted of Razorlight, The Drums and an obstinacy of buffalo trumping through a kazoo (if they ‘unfortunately’ clashed I’d plump to watch the latter) I’d love to go anyway. Norwegians are possibly the soundest, most laid-back nationality going (though I know some Swedes who have put across a compelling case for consideration), the weather will be lush, and the eco-credentials are so strong you’ll be able to cover the soles of your shoes in charcoal and drop crisp packets haphazardly onto the street from your Hummer window and still not worry about your cardbon footprint trampling on baby penguins.

Øya was all actually starting to sound a bit too good to be true so I tapped up Tonje Thilesen on Twitter to hear her esteemed views. Tonje attended the festival last year, lives in Oslo very close to the site (three of your Norwegian cycling minutes) and runs the eyegasmic music blog No Fear Of Pop. She is therefore overly qualified to comment. She confirmed that it is indeed beautiful, that it’s very small in comparison to other festivals, and that (and this may not come as a shock) it’s really expensive inside the site (a legacy I assume, of all the organic produce available, and the Norwegian government’s overzealous taxation on all things boozy). I suppose however, if you’ll cast your troubled mind back to the heady days of last summer, I’m sure you’ll just about manage to recall that you paid over-the-odds for a pint of weak, warm, corporate piss, from a high-profit-ratio bar in your very own backyard so really, I guess it’s the same everywhere. As Tonje says, and as everyone everywhere generally does (but none with as much style, guile and ferocity as the Norwegians) – “we just get wasted before we go”.

If Øya Festival all sounds like a good day at the office to you then I’ll see you in the fields come the summer of our mass content. If you can’t wait that long and you’re one of those people who carries an Oyster card, then you’ll be delighted to know that Øya have teamed up with their friends at Field Day and Club NME (vomits) for two London shows this month which will feature the new Nordic talents of Lucy Swann (think Beyonce meets Kate Bush) and Team Me, who will join Huw Stephens favourites Fiction and Negative Narrative contributors Not Squares for shindigs at London’s XOYO on 24 February and KOKO the following night. I’m not sure why all venues in London have wanky acronyms but then again there are many things about the Big Smog that puzzle me.

Additionally, Øya has teamed up with Rough Trade to release a limited edition 7” single which features Lucy Swann and Team Me. It’s available exclusively from Rough Trade and you can bag it here.