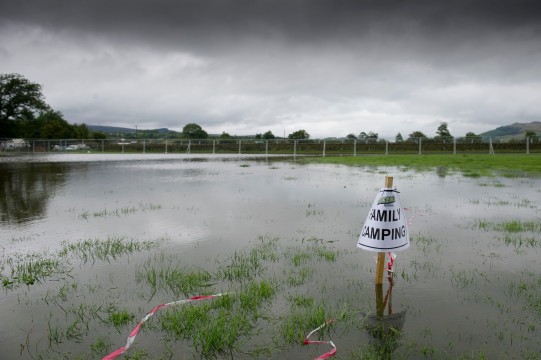 This weekend, twelve months after the inaugural Beacons was sadly cancelled due to a biblical deluge (see photo), they’re cracking on and having a second go. With lessons learnt from last year the logistics have been fine-tuned and tweaked. The site has moved to a new location on higher ground, thus avoiding both any main streams and – through the discerning programming you’d expect from the brains behind Nation Of Shopkeepers, Field Day, Eat Your Own Ears and Sexbeat – the mainstream.

The festival, handily located just outside Skipton in the beautiful Yorkshire countryside, is easily accessible from both Leeds and Manchester, both of which are (unsurprisingly) represented strongly on the bill with Juffage, Hookworms, Runners, Hawk Eyes and Eagulls amongst the bands representing the former, and Stay+, Stay Slinger, Factory Floor and XXXY some of the acts flying the flag for the latter.

Affiliations with Vice and The Stool Pigeon mean the bill is peppered with buzz bands, 10% of whom will ascend to greater things and wider recognition, giving everyone in attendance the ultimate hipster bragging kudos of seeing them when they were unknown/before you/in a field (delete as applicable). The other 90% will presumably fade into the unforgiving vortex of oblivion – pastel slacks, shit haircuts, winklepickers and all.

The biggest names come in the form of Toots & The Maytals, Wild Beasts, Roots Manuva and Patrick Wolf (who is playing an acoustic set), with Willy Mason and Negative Narrative uber-darlings The Wave Pictures also slotting in to the three day programme. There is also a distinct clubbing element to the weekend with Andrew Weatherall, Julio Bashmore and Pearson Sound amongst those taking to the decks.

There’ll be several Negative Narrative intraviewees on the bill too, proving that maybe we’re ahead of the curve after all (even if we didn’t mean to be). Glaswegians Errors will be redefining truth and righteousness via the medium of math-rock, Post War Glamour Girls will continue to cheekily taking a baseball bat to the back of misery’s lame legs, and Visions of Trees will bring their haunting, penetrating and freaky slashtronica to the metaphorical table. Double Muscle will show why they’ve been hailed as the new bearers of the LS6 noise-punk thrash-fuck standard by some* (*us), Grass House have agreed to inject some atmospheric eeriness, macabre spoken melodrama and dark-hearted malevolence into proceedings, whilst Theme Park will no doubt bring their youthful vivacity which has been bespokely tuned to soundtrack summers.

As well as musical dalliances Beacons promises a craft beer emporium, Sheffield Doc/Fest screenings, guerilla theatre, art installations and a vintage market. Rumours of a beard Olympics and a ‘Most People In Checked Shirts Huffing Gak In A Field’ record attempt are as yet, unsubstantiated.

Aside from building an ark, Beacons have done all they can to protect themselves from the elements and provide a little something new, fun and – possibly most important of all – interesting, for everyone. As of a few days ago there were only a few weekend tickets left. If you want to come along, you’d be advised to snap one up very quickly.

If you need further convincing, then cast your dilated peepers over the promo video below and check out some of the many mixtapes currently doing the digital rounds.