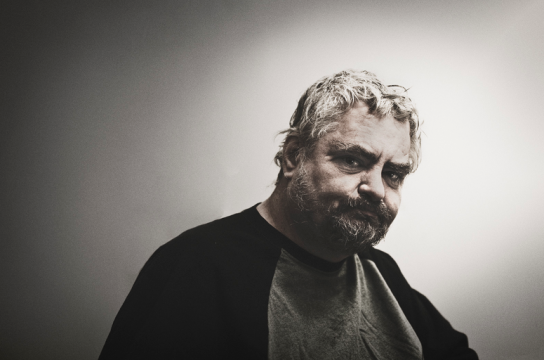 Many of us are familiar with the story by now. Been there, done that. Others pretty much skipped it and just bought the ‘Hi, How Are You?’ T-Shirt.

My staunchly atheistic Dad always warned me as a kid, NOT to fool around with the occult.

“You don’t believe in spirits Dad, you dick. Fuck it, let’s commune with Lucifer via the medium of this deck of playing cards.”

As I got older, I realised that he didn’t have to believe in anything, he’d just seen enough to know how easily a fertile mind could quicksand up to its nostrils in shit.

Despite having decoded this warning, I unwittingly waded into the disquieting tape hiss of Daniel Johnston’s expansive back catalogue around the same tender age he was swept away by the ‘Laughing Rapids’ of the aptly-named fairground ride he compered at Astroworld aged 22: ‘The River of No Return’. Daniel inadvertently documented his descent into mental breakdown on the Yin & Yang of his cassetteography – ‘Yip/Jump Music’ and the notorious Hell Ride ‘Hi, How Are You?’. Ping Pong-ing in and out of success and failure, depression and mania numerous times over the ensuing 20 years (including rampaging around New York ‘King Kong’-style pursued by babysitters Sonic Youth, signing briefly for Atlantic Records in ’92 and exorcising an old woman right out the window of her first floor apartment), the greying Daniel, belly pregnant with Psych Meds, defied his Demons and the name of the aforementioned carnival ride managing to find some of the adulation he had always sought, and more than deserves. Which unfortunately, as with everything in Daniel’s life, comes at a price.

The ‘Space Ducks: Soundtrack’, is yet another entry in the well-meaning, family-mismanagement of Daniel’s still considerable, albeit now diminished talent. Unfortunately this is probably the only version of his now fading incandescence we’re ever going to get, and the price we pay for him staying alive, productive and comparatively sane (his webstore sells iPad cases for practically the same amount I paid for an original piece of his art ten years ago).

Despite having written and illustrated his own comic books since childhood, ‘Space Ducks: An Infinite Comic Book of Musical Greatness’ was released only last year, funded by a Kickstarter campaign. Added into the bargain of an online pass to view a digital copy of the comic for minimal contributors was the download of MP3s of “accompanying songs”. Tellingly, the extent of these songs’ relationship to the ‘Space Ducks’ comic book, seem tenuous at best. Other than the title track and a few of the guest artists’ songs’ celestial preoccupations, this doesn’t seem to be the concept album about a troupe of anthropomorphic ducks liberating Space that you’d be forgiven for assuming it is.

Which isn’t to say it’s all that bad; Daniel seems to be enjoying himself, when he’s involved that is, being as this album echoes so much of his recent appearances/output in that he’s being steadied by famous friends (Johnston’s contributions account for seven amid a tracklist of 12 on the US release, 14 on this, the ‘European Volume’). Thankfully Daniel’s recordings seem a lot less patronised production-wise than on recent releases. Adrian Quesada of Austin Texas’s funk/mambo/merengue/cumbia band Grupo Fantasma ironically seems to ‘get’ Daniel’s necessity for a Lo-Fi environment better than Mark Linkous, who incongruously saw fit to sonically dress the mad and flabby Daniel in the Disney Cinderella mess of 2003’s ‘Fear Yourself’. Given that he eventually did himself in, you’d have thought he’d have known better.

So idiosyncratic and baggage-laden is Daniel, that the appearance of these other contributors – Fruit Bats, Jake Bugg, Eleanor Friedberger, Die Mason Die, Lavender Diamond and Deer Tick (Unknown Mortal Orchestra are exempt because their ‘Satanic Planet’ just sounds like a fucking awesome, galloping outtake from the sublime ‘II’) is more than a little diverting, (especially considering Daniel is absent for the last four tracks) despite Quesada’s admiral attempts at keeping proceedings cohesive. While not a bad addition to Daniel’s modern output, a concept album this isn’t. Which is especially apparent given how it pales in narrative-comparison to the bulk of his discography; itself a series of living concept albums fleshed-out with fully formed bit part characters, an angelic love interest and the eternal (internal) struggle between good and evil for their larger than life protagonist.

A confluence of events saw fit to deliver Daniel’s back catalogue unto me at the right time and thematic juncture in my life as to be able to wholeheartedly empathise: Demon semen pumping through my temporal arteries, and deliberations on whether or not to lance my throbbing temples with Wilkinson razor blades, or snip my wrists with nailclippers. I heartily recommend the experience to anyone frivolously wearing a ‘Hi, How Are you?’ T-Shirt, or Jake Bugg and I’ll even supply the lysergic.

Suicide or survival could only improve the two immeasurably.